From Inkipedia, the Splatoon wiki
(Redirected from The Square)
Jump to navigation Jump to search 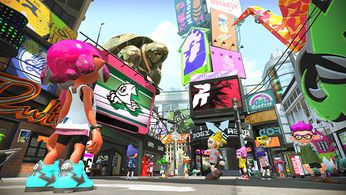 Inkopolis Square is the main hub of Splatoon 2.

Inkopolis Square is much smaller compared to Splatoon's Inkopolis Plaza. The Square is populated with Inklings and Octolings with which the player has played multiplayer matches with or with players who have posted drawings to social media. When interacting with them, the player is able to see their level, their ranked mode with the highest rank or power, recent played weapon and turf inked points with it. The player is also able to order certain gear worn recently by others and give "Freshes" to drawings. Posts may also come in the form of graffiti seen around the Square. Naturally, the option for other players to post drawings to social media is also available. Posted drawings may be shown on other players' games. Around the back of the Square is a "spawn point" where the player is spawned. 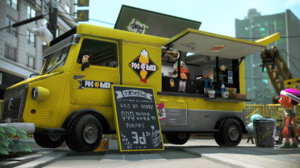 The Crust Bucket is located just behind the spawn point. This food truck is run by Crusty Sean. Here, the player can purchase food and drinks with tickets that give bonuses for the player's next twenty multiplayer battles. Since the Crust Bucket is not accessible through the menu, unlike other shops, the player has to walk to it manually to purchase a snack or a drink.

The Deca Tower is located to the far north side of the Square, serving as the Battle Lobby, allowing the player to access online battles. Judd and Li'l Judd are just left of the Deca Tower's entrance and give the player helpful tips and other rewards. Just to the right of the entrance is Murch which helps the player with all things gear related. Before Splatfests, progress of a stage being build above the entrance can be seen. During Splatfests, Murch, Judd and Li'l Judd can be found in the middle of the Square instead and Off the Hook can be seen on the stage. When the Great Zapfish is rescued, it can be seen curled around the top of the Deca Tower. The Battle Lobby can also be accessed through the menu.

The Deepsea Metro is a subway system running deep beneath Inkopolis that serves as the hub area for the Octo Expansion. The entrance of the Deepsea Metro is located to the northeast of the spawn point. The Deepsea Metro can also be accessed through the menu. Players that do not own the downloadable content are not allowed to enter, however. 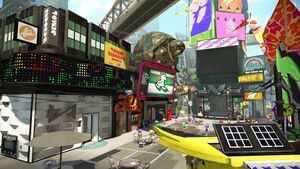 The Galleria is found to the west of the spawn point. It is a row of shops that contains the gear and weapon vendors. Just like the previous game, there are four shops, with each having a shopkeeper:

Each shop can also be accessed through the menu. 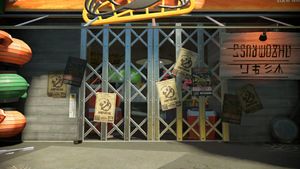 Grizzco Industries when they are not hiring.

Grizzco Industries headquarters are found to the northwest of the spawn point. This a shop where the player is able to play Salmon Run. Depending on the time, the shop is open or closed. When the shop is closed, a message can be read for the player to come another time. Next to the entrance is a machine which the player can use to claim their rewards for player Salmon Run. Unlike any other instance, when the player is inside the shop and exits out by pressing

, they spawn in front of the shop. Grizzco's shop can also be accessed through the menu. 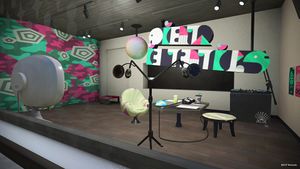 Inkopolis' studio has a television, used to display battle stages, Marina's turntable, microphones to amplify Pearl and Marina's voices when hosting the news, along with posters resembling Pearl and Marina's talk icons. The upper floor is empty, although it has a poster with a Inkling girl on its walls. It has a arrow-shaped sign on the window that reads 'On Air'. The Off The Hook live news logo can be found suspended from the ceiling on the back wall. Inkopolis Studio is not accessible, as it cannot be entered or viewed through the map. The name 'Inkopolis Studio' is something that has not been specifically named and could be conjectural, as the name is simply based off the pop idols inside possibly using it as a studio, and the 'On Air' signs they display, similarly to a real studio.

Octo Canyon is a hidden location near Inkopolis Square. A manhole northwest of the spawn point leads to it. The manhole has a Squidbeak Splatoon flyer on it. You can zoom in on it with

One of the Squid Sisters, Marie, can be seen on the manhole, but when the player approaches her, she will drop down, revealing her squid form slightly. The player can follow her by stepping onto the manhole and then pressing

. The Octo Canyon serves as the setting of the single-player mode of Splatoon 2 with the same name. Octo Canyon can also be accessed through the menu.

The Shoal is located to the east of the spawn point. This is an amusement arcade where local multiplayer is available. The Arcade Machine can be found just outside of it and is where the player can play Squid Beatz 2. The Shoal can also be accessed through the menu.