Tickets are a collectible in Splatoon 2 and Splatoon 3, obtained through various means, such as finding them in single-player or receiving them in Salmon Run bonuses. 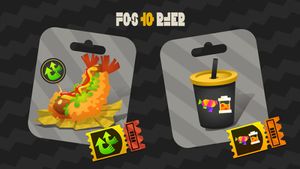 A sample of Meal and Drink Tickets.

Crust Bucket Tickets are coupons to be used at the Crust Bucket in exchange for meals or drinks. Upon using a ticket, the player gains a boost to rewards gained from Regular Battles, Ranked Battles, and League Battles, lasting a total of twenty matches. These boosts can affect either Cash received or level experience gained (for Meal Tickets), or gear experience gained and the chance of rolling a certain ability (for Drink Tickets). Meal Tickets multiply the earnings by a factor of either 1.5, 2 or 2.5, depending on the ticket used, whereas Drink Tickets always multiply by 1.5.

When using a Drink Ticket, there is always a 30% chance of rolling the ticket's favored ability, no matter what brand the gear is from.

Tickets can be found in various Octo Canyon missions as pickups. Once a ticket has been taken, it cannot be obtained again; picking it up will grant the player one Power Egg instead.

After fully upgrading everything at the Ammo Knights Enhancifier, the player will also be able to purchase a random meal ticket for

1500 Power Eggs. This option is only limited by the number of Power Eggs gathered by the player.

It is possible to trade in a mem medal or 15,000 CQ Points at a vending machine located at the Central Station, after beating the final Turf War of the campaign, to get a random reward. These rewards include Drink and Food Tickets.

After completing one stamp page, the player is rewarded with a ticket. Unlike Octo Canyon, this reward may appear again with the completion of another page.