Towering Heights is the eighteenth mission of Splatoon 2's single player mode Octo Canyon. It is an extremely vertical mission.

To the left, near the center of the map, is a gusher. Use it and unfurl the several Inkfurlers ahead. The kettle is at the end of the path.

Below the spawn is a platform covered in Octarian ink, with a tall block in the middle with a launchpad on top. Three Rocket Octocopters will spawn as the player advances. Get to the launchpad to go to the first checkpoint.

The player lands at the bottom of a square spiral path upwards. At each corner enemies spawn at the next corner, so as the player advances upwards, more enemies spawn. At the first turn, an Octotrooper spawns, at the second a Twintacle Octotrooper spawns, at the third an Octotrooper and an Octocopter spawn, at the fourth nothing spawns, then at the fifth, the player turns at an uninkable wall, with a Octobomber behind it. To the right of that is a platform with a launchpad to the next checkpoint.

The player lands on a platform with a Ride rail. The ride rail circles around the tower to the right, ascending then descending when at the top. As the player rides the rail, three Twintacle Octotroopers in three hatches in the tower will try to shoot the player. The shots can reach but cannot effectively damage the player. The player can use bombs or their main weapon if the range is suffice, to hit the Twintacle Octotroopers. Splatting each of them will spawn Squid Rings ahead while failing to do so does not interfere with progression. At the top, the player has to jump off the rail onto a platform extended out from the top of the tower. A squid ring is present to guide the jump. Failing the jump can be fatal, however, if the player doesn't jump they will follow the ride rail down back to where the rail starts. Once on the platform, climb up the rest of the tower and use the launchpad at the top to the next checkpoint.

Ahead is a complicated structure with paths leading up to blocks. The launchpad is on the farthest block, while three Octosnipers occupy three blocks as well, one to the right of the checkpoint, one to the left, and one in front of the launchpad. The player has to navigate through the structure while evading Octosniper shots, defeat them if necessary, and reach the launchpad to the final checkpoint.

Drop down the plank walk onto the platform below to get it to start moving. In the right corners of the platform are sponges, in the left corners crates on top of uninkable blocks, and in the center a larger sponge. Enemies spawn as the platform progresses. Two Rocket Octocopters spawn 3 seconds after the platform starts moving, then two Octotroopers on balloons at 11 seconds, then two Twintacle Octotroopers on balloons at 22 seconds, then the platform stops at the corner of its path after 30 seconds of moving. At this point, two Octosnipers and two Sprinklers spawn on pillars to the sides. The platform continues moving 5 seconds after it stopped until it stops again after 30 seconds at a platform with grating with the Zapfish on it. 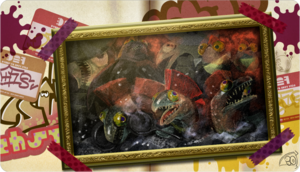 Location: At checkpoint 3, take the left path and keep going straight to the ledge. From there drop down to the platform below with a grating path from it. A lone crate on the grating path contains the Scroll. 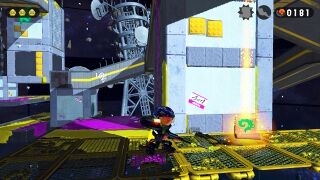 Location: Get onto the sponge in the middle when the platform in the final checkpoint stops to turn. The Sardinium is in the air which can only be reached with a fully extended sponge. 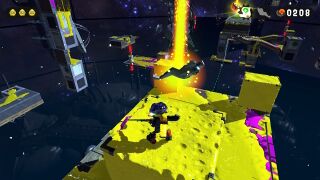 Towering Heights has 3 pieces of armor to collect.

Armor 1 Location: In the top crate of the stack of crates at the fourth turn at checkpoint 1.

Armor 3 Location: On the far left corner of the platform in the final checkpoint. 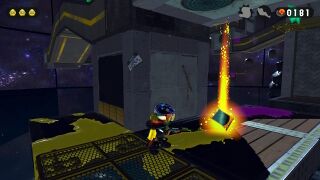