Transfer Junction
˜ Intersection of the Soul ˜​

Transfer Junction
˜ Intersection of the Soul ˜ Take one of the red saucers, and board the platform with a checkpoint and a propeller platform nearby. Board the propeller platform, power it, and use the dash panel to cross the large gap when the moving platform on the other side lines up. Once on it, wait until the moving platform lines up with the large stable structure, and use the dash panel to get there. After that, climb up the rotating block on the right, and the kettle is on one of the sides of the block.

Ahead are a series of platforms with a declining ramp leading to it. As the player approaches, the two square platforms directly in front start moving side by side, stopping at the middle and the edges of their paths. Two Octotroopers also spawn, one in the puddle of Octarian ink on the second platform, one on top of the barriers to the right of the platforms. The player can then get on the two pillars to the edges of the path of the platforms, of which another set of platforms start moving and enemies spawning. A square platform starts moving side to side further away parallel and of the same travelling distance as the two previous platforms, two more square platforms moving back and forth perpendicular to the farther platform, parallel to each other, and moving from the pillars to the farther platform alternatively, such that they meet the farther platform when the other is next to a pillar. There is also another pillar in the center of all three, which the player can jump onto to cross the platforms. Another Octotrooper spawns on the left moving platform, and a Twintacle Octotrooper on the central pillar. The next checkpoint is on the block to the right edge of the farther moving platform.

Ahead is a moving square platform on its side, as if a piece of moving wall. The player must paint it, either get on top of it or swim on its side and ride it to the right block with grating. Next are two more such walls on each other, moving side to side alternatively, such that both reach either edge of their path simultaneously. Two more Octotroopers spawn on the sides of the platforms. The player must paint the platforms and climb up them to get to the pillar on top with the launchpad to the next checkpoint.

Ahead is a moving block going up and down slowly. Wait for it to come down, ink its side and then climb up it to a platform above. There, two blocks in the far corners move up and down slowly, with two Octotroopers on top of each. Defeat them and get on the left one, then turn around and ink the sponge. Get on the sponge, and wait for the moving platform on the left to drop down. Once low enough, get on it, ride it to the top, ink and get on the sponge upfront, and proceed down the narrow path to the launchpad to the next checkpoint.

Ahead are a series of suddenly moving thin pillars with a slightly larger base to stand on. Some are vertical and move up and down, some are horizontal and move sideways. The player must navigate and get to the block at the end with the launchpad to the next checkpoint. First are three vertical pillars with two Octotroopers on the two on the back row. Then are three horizontal pillars, two left and right with two Octotroopers on the bases, and one front and back which connects to the block at the end.

Ahead is a structure with a "+" shaped platform with a Splat-Switch in the middle covered by a taped crate, some grating around the corners, a stable platform after the "+" shaped platform, a wide path leading up to it, a cube up top with Splat-Switches on all six sides, and two platforms up to the sides, both with three inkable barriers surrounding an inactive checkpoint. The player should go to both platforms and defeat all enemies there, which activates the respective checkpoint, and raises the block the checkpoint is on, allowing the player to reach the cube easier. Activating both checkpoints cause the cube to move around and rotate, allowing the player to activate all Splat-Switches. Doing so spawns a key in the middle of the "+" shape platform, activating the final checkpoint.

As the player gets on, three Rocket Octocopters spawn. Defeating them spawns a Rocket Octobomber. Defeating it activates the checkpoint.

Use the key to unlock the vault, granting access to one last Splat-Switch. Activating it causes a platform underneath to extend out, creating a path to the Zapfish. 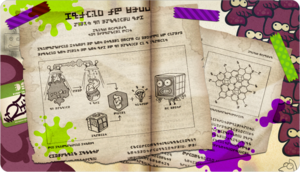 Location: Go to the space between the two moving blocks in checkpoint 2. There is a sponge down below the ledge. Ink it, get on and turn around to find the scroll. To get back use the backside of the moving blocks. 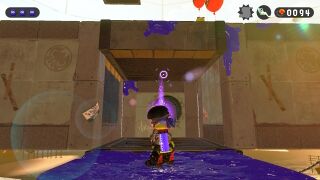 Location: On the back of the first moving platform at checkpoint 1. On the block ink its back and hop on as a squid. Descend carefully as falling too much can cause the player to drop off the platform into death. Grab the Sardinium and get back onto the wall to return to the level. 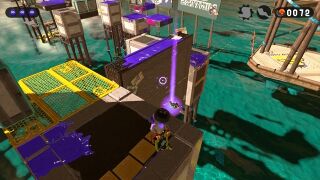 Transfer Junction has 3 pieces of armor to collect.

Armor 1 Location: In a crate under the grating on the bottom end of the block in checkpoint 1.

Armor 2 Location: Behind the barrier directly in front of checkpoint 3.

Armor 3 Location: In the top crate of the crate stack left to the final checkpoint.