For the similarly named special weapon in Splatoon, see Inkstrike.

The Triple Inkstrike is an upcoming special weapon in Splatoon 3.

Overall, the Triple Inkstrike features bright green and orange colors, similar to the original Inkstrike and Splat weapons from Splatoon.

The Triple Inkstrike consists of three parts: a missile launcher, three throwable beacons, and three missiles. The launcher resembles a multifunctional pencil case with three "pencil holders" where the three missiles are launched from and a drawer at the bottom for two extra throwable beacons. The throwable beacons are based on pencil sharpeners, with a single hole where a pencil would be inserted along the equator and a clear red dome on the top half where the sharpener blade is visible and pencil shavings would be held. When the beacon lands, the bottom half transforms into a stand and the beacon emits a signal laser from its top towards the sky. The missiles resemble pencils, with the long hexagonal main body with some Inkling text written on the side, a clear red protector with googly eyes covering the tip that resembles the nosecone of the original Inkstrike, and the missile propellers covering the eraser end that deploy upon launch. 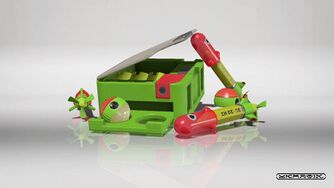 Once activated, the user launches three missiles into the air immediately. Then, the user can throw up to three beacons, each of which marks where each missile will land with a landing marker. Then, each missile strikes at where each beacon lands and upon impact creates a giant ink tornado that inks the ground and splats opponents caught in it. It appears that the missiles do not leave behind ink if they hit the ground after the end of the match. As of the Release Date Revealed trailer, it is part of the Slosher's kit.

Most other statistical information, such as base damage and turf painted, are currently unknown.