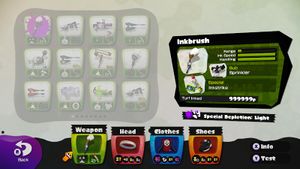 Turf Inked is the score of how much ink the player's main weapon has covered in online matchmaking battles, counting from 0p up to 999,999p. Using sub weapons also increases this total and it is effective in both Regular Battles and Ranked Battles. When a team wins a battle, the winning team receives more points. For example, when winning a Turf War match, the player's score and ink turfed are both increased by 1,000p. This type of score is not tracked in other modes, such as the Battle Dojo, Recon, Salmon Run, or single-player modes.

In SplatNet 2, users can check their total turf inked score, as well as for individual weapons. The total lifetime inked turf score has two counters, one for Inklings and Octolings combined, and one for Octolings separately. Weapon scores use a shared counter. In Version 4.6.0 of Splatoon 2, weapon badges were added that signify greatly-used weapons.

It is also possible to spread ink to nearby surfaces by jumping near the edge of a puddle of ink while in squid or octopus form, which counts as inked turf. If the player steps on uncovered floor after being submerged in ink, small footprints can be seen on the floor. However, this is only a temporary effect, as the footprints disappear after a few seconds, and therefore, this does not count as placing ink.

Competing in Turf War with a main weapon counts after a match has ended. Players also gain cash and experience after a match, but from Splatoon's 2.0.0 update, players under Level 20 only gain experience with the amount of ink the user has turfed. This also applies for upgrading hats, clothing, and shoes. In Splatoon, the method of gaining experience changes after Level 20, but the ink turfed is still tracked in the same way.

If a Turf War match ends without any players placing any ink, the spawn point still counts as ink placement. This situation may lead to a tie, in which the winning team is randomly chosen, gaining bonus points for winning as usual.[1]

When winning a Ranked Battle, players win about 500p alongside a 3,000p bonus, for a total of 3,500p, although the score increases with rank. These points are added to the player's ink turfed count. Losing players, however, receive no points.

If the match does not end in a knockout, the points are shared based on how close the Tower Control or Rainmaker made it to their respective goals and how close players were to winning on points in Splat Zones and Clam Blitz. The points total does not change when overtime occurs.

If overtime is not triggered, the losing team gains experience by only how long the match has gone on for. It only increases their experience and not their turf inked, however.

In a Private Battle, ink placement is counted during the match, but does not add to any statistics outside of this mode. Similarly, coins and experience are also not gained.