The in-game tutorial in the Splatoon series introduces players to the basic controls and techniques used in the various game modes. Upon starting the game for the first time, the tutorial begins after the player has customized their Inkling's appearance. 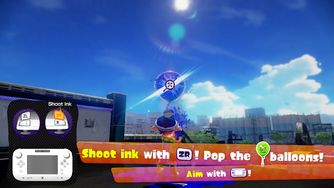 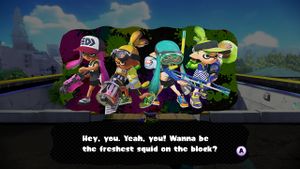 The introduction to the tutorial.

Upon beginning the tutorial, players will encounter two sets of instructions. The first includes an image of four Inklings and states, "Hey, you. Yeah, you! Wanna be the freshest squid on the block?" This window can be bypassed by pressing

The second set of instructions displays an image of various Inklings performing tasks such as swimming through grates and Super Jumping and reads, "We'll teach you some funky-fresh moves on the way to Inkopolis!" Like the first message, this window can be bypassed by pressing 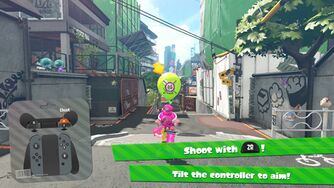 The in-game tutorial helps new players learn the basic controls and techniques of Splatoon 2 for other modes. Upon starting up the game for the first time, players can access the tutorial after customizing their Inkling's gender, skin tone, eye color, hairstyle, and choice of legwear. The tutorial takes place in the back alleys of Inkopolis around a construction site.

Throughout the tutorial, balloons spawn with a guiding arrow pointing at them. Players are encouraged to pop them and learn the controls, though they are not required to do so (except for at the beginning until they are given control to move around). Balloons only spawn after the previous one is popped, or the player enters a new area. A button map is kept on the bottom left corner at all times, and labels for each button are added to the map as they are introduced to the player.

The tutorial starts with the player holding their aim on a balloon directly in front of them. They then are introduced to

which they can use to reset their motion controls. Next, they are instructed to hold down

to shoot down the balloon. Another balloon spawns to their right after the first one is popped, and then another one further to the left after popping the second one. This one is too far for the player to shoot down, and after a moment they are allowed to move towards it with

to look around the corner. The next one is located on the other side of the wall. After that, the player has to take a left turn to walk across a short bridge to the next balloon.

Players are then introduced to a closed area with girders and uninkable cloth. After dropping down a ledge, they are introduced to

which allows them to enter squid form. They can then swim up to the concrete structure ahead already painted with their ink. The first balloon is on top of the structure, the next one to the left of it, and the one after that on top of a vertical inkable wooded board with upward arrows marked on it. The player is hinted to ink the board and swim up it.

They are then introduced to a passageway surrounded by tall walls. After dropping down a ledge, they are introduced to

which allows them to jump. Ahead is a balloon on top of a two-step uninkable staircase. The player has to jump onto the stairs to get over it. The next balloon hovers over a left turn. There is a vertical short grate wall ahead, which the player cannot jump over but have to swim through with the ink laid down on both sides of the grate. After that, there is another grate wall on top of a short uninkable ledge. Players have to swim in the ink to gain momentum and then jump in front of it to pass the ledge and the grate onto enemy ink.

. The next balloon is in front and the one after that around a left turn. Players are then introduced to

which allows them to throw their Splat Bombs, as well as to submerge in ink with

to regain ink. Ahead is a wall split vertically into three parts: the one in the middle taking up half the wall, being uninkable with two large crates side by side on the ground and a grated wall on top; and the two on the side taking up a quarter each, being inkable with a stack of three large crates each. Players can throw a bomb at the crate to blow them up or take down the crates one by one. The player is then told they can press

repeatedly to swim up walls faster. They can then ink up one side of the wall and climb up it. The next and final three balloons sit on top of the wall, ahead up the ramp, and ahead up another ramp on the left. After popping the last balloon, an arrow guides the player to a launchpad in front. When on it, the player is hinted to press

, and this allows the Inkling to Super Jump to Inkopolis Square, taking them to the initial news section.

Inkoming! (Cloud Demo) by Wet Floor, a less intense version of Inkoming! by the same band. This version has ten separate audios that play as the player progresses; see the Cloud Demo section for details.