Underground Expressway is the twenty-second mission of Splatoon 2's single-player mode, Octo Canyon. It is the first and only mission that Sheldon requests the player to use the Herobrush.

Ahead is a path littered with crates then Octopods. Go through the crates and defeat the Octopods and the Twintacle Octotrooper ahead. To the right from there is a continuation of the path with invisible platforms. There is an Octopod sitting on a crate on the other end. Go straight and defeat the Octopod, turn right at somewhere two to three crate positions away from the crate towards the snow cone at the other end, then turn left at the snow cone to a platform with a launchpad to the next checkpoint.

Activate and ride the ride rail which takes the player to the next checkpoint. Pop the balloons on the way if preferred.

Ahead is a narrow path with a Tentakook attached to a balloon. Chase it down. The path goes from visible to invisible after a left then a right turn, and makes a loop with a crate which the Tentakook will go around, then ends after a right then a left turn, from which the Tentakook will drop off to the left onto another loop of invisible platforms with the "8" shape. Defeat the Tentakook, grab the key it drops, and take it to the vault below the end of the invisible path where the Tentakook dropped off, which uncovers the launchpad to the next checkpoint. Note that it is possible to defeat the Tentakook before it drops off with enough range or mobility, saving time in the process. There is also another ride rail next to the vault back to the first loop above should the player need to get back up.

Ahead is a set of two platforms each with a dash track to cross the gap in between. On the other platform are two Twintacle Octotroopers. Defeat them and proceed along the narrow path on the other platform. Drop off at the grates to the next checkpoint.

Ahead is a broad platform with four Octotroopers and a Shielded Deluxe Twintacle Octotrooper in a field littered with inkable barriers and dash tracks, separated from the player by a wall of crates. Destroy the crates and defeat all five enemies to activate the launchpad ahead on a raised platform to the next checkpoint.

Ahead is a broad path filled with Octarian ink, with a broad platform at the other end with two Octopods sitting on a wall of crates, an Twintacle Octodiver below the crates, and an Octocommander on another crate behind. Go through all of that and proceed to the next checkpoint ahead.

Ahead is a large square platform with a large inkable box in the center, surrounded by a lowered moat. A Twinacle Octotrooper patrols around the moat, a Tentakook carrying a key in the moat, and a Shielded Octotrooper carrying a canned Splashdown on top of the box circling a small vault with the Sardinium. All of that can be ignored, where the final checkpoint is ahead at the other end of the path.

Ahead is a structure made of invisible blocks, with a wall on the close end to climb on with crates on it, a box in the middle with crates on it, four towers on the side of the field, an Octocommander on a wall of crates on an uninkable platform on the other end of the field, and two Industrial Squee-Gs on the field: one with a small inkable block and another Octocommander on it, another with a tall inkable block tower than can only be climbed onto by the wall, the box, the four towers on the side or the uninkable platform, with Armor 5 on top of the tower. Get onto the Industrial Squee-G with the block tower, defeat the Octocommanders, and get onto the uninkable platform. The Zapfish is sitting at the other end of the path.

The far right tower on the sides in the Final Checkpoint has a Power Egg on top instead of a crate. Get onto it, then ink in front to reveal an invisible platform ahead. Keeping inking to the edge of the platform, then turn left from there and ink to reveal an invisible block ahead. Get onto the block, keep inking and drop off in front at the edge onto another invisible platform. Turn left from there and go straight. The Scroll is at the end of the path. Alternatively look for the platform from the right edge of the platform with the Zapfish and drop onto it. To get back follow the original path back. Be wary that there is a gap between the tower and the first platform, and between the first platform to the block. 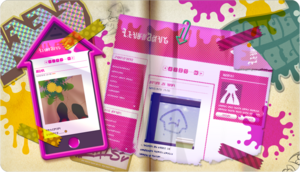 Location: After the last area with the Octocommanders, drop ink over the edge of the path to the Zapfish to reveal an invisible platform. The Sunken Scroll will be there. To get back reveal the rest of the invisible path and jump on top of a Squee-G. 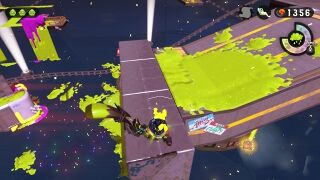 Location: Defeat the Tentakook in checkpoint 7, bring the key dropped to the vault on top of the large box holding the Sardinium next to the Shielded Octotrooper holding Splashdown 2. 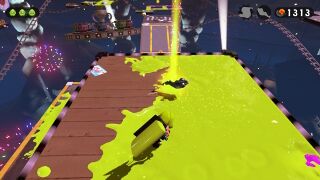 Underground Expressway has five pieces of armor to collect.

Armor 1 Location: In the crate on invisible platforms with an Octopod on it in the beginning area.

Armor 2 Location: In the crate next to the rail and Checkpoint 2.

Armor 3 Location: Behind the far left barrier in Checkpoint 5.

Armor 4 Location: In the crate to the right in the Final Checkpoint.

Armor 5 Location: On top of the Industrial Squee-G with the block tower.

Curling Bomb Launcher Location: In the orange crate to the left of the wall of crates in Checkpoint 5.

Ink Storm Location: In the left crate in the Final Checkpoint.

Splashdown 2 Location: Defeat the Shielded Octotrooper in Checkpoint 7 next to the vault containing the Sardinium.