Unidentified Flying Object is the ninth mission available in Splatoon's single-player mode, Octo Valley. It is the first mission with an Octostriker, an Octarian enemy that launches Inkstrikes, and takes place in a modified version of the tutorial area. 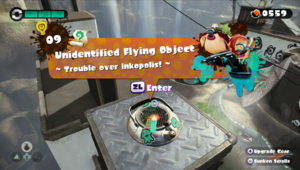 After beating The Mighty Octostomp! in Area 1, the player can move on to Area 2 via an Inkrail near the Boss Kettle. This level's Kettle can be found by inking a wall near the left side and then jumping one platform to the one where the kettle is. 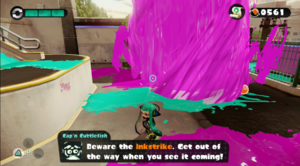 Once you have walked a few yards out of the spawn point, the Octostriker (resting in a pool of ink in a UFO) will notice you and start shooting Inkstrikes. To avoid it hitting you, shoot some ink down on the surface and hide, as the Inkstrike will not strike if so. Since the first checkpoint is nearby, use a Seeker to get there without being spotted. 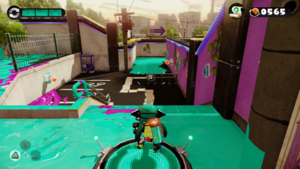 Near you are some Squee-Gs with Power Eggs on them. Grab the Power Eggs and turn into squid form to get to the other side of the wall, as a pre-inked path of your ink color is nearby. 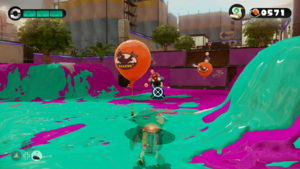 Several Octodivers are hiding in the ink around the skateboarding area, so make sure to use Seekers and take them down. Once you get to the slopes, a Twintacle Octodiver is hiding, so take it down too. Make sure to also throw Splat Bombs at the trees, as Power Eggs are in them. 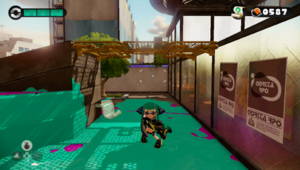 Use the Gusher nearby and then throw a bomb at the ink puddle on the platforms to defeat the Twintacle Octodiver in it. To find the Sunken Scroll, go behind the platforms and shoot the box to obtain it. Jump across the yellow grated walkway to get to the next checkpoint. 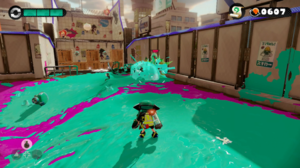 Try not to get too close to the grated wall, as two Octodivers rest in the ink, but you can throw a Splat Bomb to defeat them. Once the player defeats them, jump off the platform onto the UFO crash site. Make sure to use Seekers once more, as more Octodivers are around here. 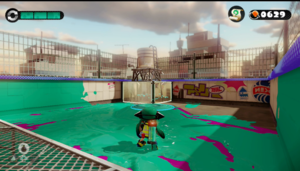 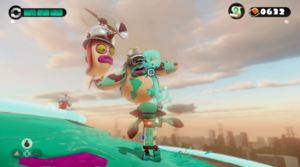 The Octostriker will summon three sets of Octocopters, which will all respawn four times until defeated. While defeating them is optional, you must splat the Octostriker. Once this happens, an explosion occurs, releasing the Zapfish from the purple ink. Level complete! 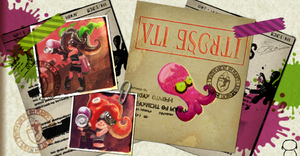 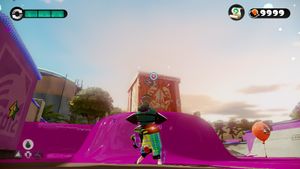 Location: There is a large crate in Checkpoint 2 surrounded in the enemy's ink. Shoot at the crate and the armor will appear.