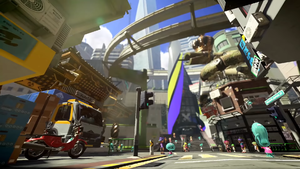 Battle Lobby Tower to the left of Splatsville.

Unnamed Battle Lobby Tower is the central tower in Splatsville in Splatoon 3. Similar to Inkopolis Tower in Splatoon and Deca Tower in Splatoon 2, it serves as a way to access the game's Battle Lobby. Once the player enters the tower, the player will be able to access the online competitive modes, such as Turf War and Private Battle, as well as make use of the Test Range., join friends, and play Ranked Battle if they have reached level 10. They can also play League Battle once they have reached the B- rank in any Ranked game mode.

The tower is of a modern design. The tower has three large screens wrapping up from the bottom right, around the back and up the left and front. The screens only show ink.