The unnamed bow is an upcoming main weapon in Splatoon 3. 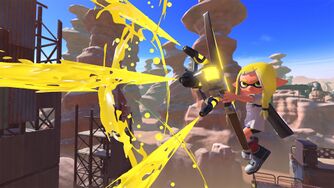 The unnamed bow was initially shown in the announcement trailer for Splatoon 3.[1]

The unnamed bow resembles a bow and arrow or a miniature ballista, but made out of parts of a fishing rod, including a reel and string. When the Bow is fired, it launches three vertical projectiles of ink while jumping. The bow seems to be able to shoot horizontally, but only when standing, similar to the roller. The bow also seems to be able to charge up its shot before firing and can store it while submerged in ink, similar to chargers, and allows the wielder to quickly strafe back and forth in humanoid form while holding a charge, much like a splatling. To fire the weapon, the Inkling or Octoling pulls back on the string, which changes color depending on the user's ink, and then lets go of it after a short period of time. [2] The ink tanks on the weapon and the bow string seem to light up for a short period after being fired.