Unnamed Stage 1 is a multiplayer stage in Splatoon 3. 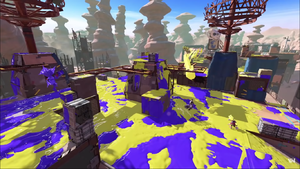 Unnamed Stage 1 is a stage located in a deserted wasteland (presumably within the Splatlands). The center of the stage contains a climbable platform connected with grates to other platforms.

The stage looks somewhat similar to the Rainmaker variant of Piranha Pit, with the general shape, color, and placement of certain platforms. There are two poles next to the center of the stage on top of elevated platforms, both with dome-like shapes on top of each platform and two other poles, both having a big fish skeleton on top of each one. The map seems to have a fair amount of elevation as well, with multiple towers that are constantly taken advantage of in the Splatoon 3 trailer, as seen by the user of the Hydra Splatling and the user of the Unnamed Bow. In-game mechanics, such as sponges, and inkrails, do not seem to be included in the stage. The grates leading to the middle platform don't seem to be symmetrical, while everything else is.