From Inkipedia, the Splatoon wiki
< User:CreatorGX
Jump to navigation Jump to search

It has been reported[1] from multiple users that there are a few players in Splatoon hacking their save files to make themselves into Octolings within Multiplayer modes.[2] While this may seem like a non-malicious exploitation, coming across one or more of these Hacked Octolings has the potential to corrupt Splatoon saved data, making the game crash and rendering it unplayable. Encountering such players is not a common occurrence, but users must be warned nonetheless. 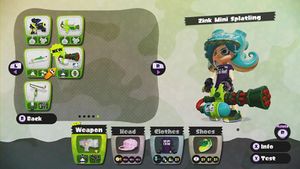 A hacker using an Octoling in place of an Inkling, as well as an unreleased weapon

If you encounter a player that has done this, you need to make sure to stay in the lobby until they leave it, and then play one more match. Avoid going to Inkopolis Plaza until the second match is played. Doing this will prevent the offending player's Octoling character from appearing in the Plaza.

The overworld is not designed to load Octolings at all, and so if one is placed into it for whatever reason, the game will crash whenever it tries to load them. This includes the title screen, which means the save file is effectively 'soft-locked'.[3]

It is highly recommended to back up Splatoon's save data onto a flash drive to ensure safety online.[4]

If a Hacked Octoling has already done its damage to the save data and the game is rendered unplayable, there are ways to fix the issue until the issue has been resolved by Nintendo via a patch.