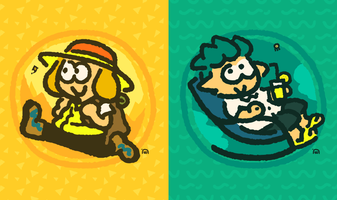 Europe's first single-region Splatfest since April was a perfect one for the summer. School's out in most places, and the weather is perfect to go on holiday! The question is: how would you rather spend it? Do you want to go out and see new sights and exciting new places and experiences... or just kick back, lie on the ol' hammock, drink in hand, in the backyard (or lie on the beach, taking in the sun, sand, and sound of the surf)?

From the way I started this blog post, I think you know where I fall in this debate. Hit the road and do all the things you'd never have time for normally! Say you're goin' to Disneyland! Make out in the dunes of the Cape! Wonder at the Biggest Ball of Twine in Minnesota! Find out just the way things go in AAAAAAAAAAAAALBUQUERQUE!

Ok, I guess my holiday ideas come from pop tunes *heh* Either way, Team Adventure it is!

I started out this Splatfest with a team made up of myself and 3 central Europeans from my Twitch community (one of whom is another streamer himself, and we collaborated).

We struggled....badly! The other streamer was known for inking between 1500-2000p almost every match and he was kept low, to the point where his Splatfest power was barely 2000.

You know it was bad when even "Dude" from Ghost Gaming struggled to get a power of 2300. One of the best players in the Western World, and even he had trouble on Team Adventure. Like the other Splatfest that weekend, I was calling it as a sweep for Marina only a few hours after the fest started, and watching other streamers only solidified that more. There was a bit where it looked like Team Adventure might have had the popular vote (mirror matches here and there), but that thought faded after watching more on Team Relax, and the mirror matches they were getting closer to the end of fest.

Once again, I was shocked at the results. Solo Play results were even CLOSER THAN THE MEIJI SPLATFEST, with a difference of only 0.22%! Only Team Lemon, with its 0.18% Solo Play win, was closer! Granted, unlike the Meiji fest, Team Play was a sizable margin win for Team Adventure (which was itself a HUGE shock, because of the streamer struggles I saw), but since Team Relax took popularity, they were DAMN close to being Marina's first Europe-only Splatfest victory!

Perhaps...if they hadn't been so relaxed, and been a bit more adventurous... *heh*