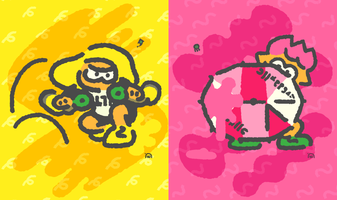 This Splatfest stands out for three major oddities, the first of which is that it was erroneously announced for the wrong day. When they first announced this, it was scheduled for the day after the Front Roll vs. Back Roll Splatfest, a Sunday. Voting was open for only a few minutes when Nintendo realized their mistake and withdrew it, leaving many users in their Basic Tees.

The following Friday, this Splatfest was properly announced, but with oddity #2: it would start 2 hours earlier than usual, coinciding with the North American Splatfest that was also just announced, but we'll get to that later. Once voting re-opened, I chose Team Dexterity, mainly because I like to keep moving, even if I don't always get the chance to do so. My partner chose Team Endurance.

During the week that came before Splatfest, I noticed oddity #3: My Splatfest Tee said "ENDU RANCE" in Inkling Script. Thinking there may have been a translation error, I did research over two days, including trying to decode the Inkling Script on the Team Endurance tees. I soon discovered it said "INSTANT".

Approximately 9 hours and change later, I finally Queened out. Tired and beat, I slept, but it would only be for a few hours, because I wasn't done with Splatfest yet, and my partner and I had plans Saturday night!