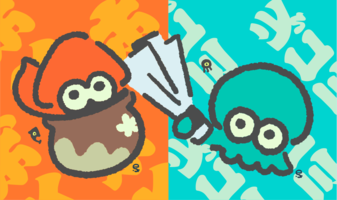 The comedy duo. It's one of the most basic forms of comedic theater. You have one who is the "funny" one, the "comic", supplying all the jokes and miscommunications, coming off as the buffoon who can't tell their right from their left, and you have the "straight" one, the everyperson, the "stooge" who has to stand there and deal with the former's antics. We in the West have many examples of this in our theatrical history: Laurel & Hardy, Abbott & Costello, Martin & Lewis, Burns & Allen, Pete & Dud, the Smothers Brothers... hell, even cartoons like Pinky & the Brain follow this trope.

In Japan, this trope has a history as well. The comic of the duo is called the "boke", while the stooge is called the "tsukkomi", and much like Oliver Hardy had his hat to smack some sense into Stan Laurel, the tsukkomi in Japanese comedy tradition tends to carry a paper fan for the same purpose. This style of comedy is so globally known, that I'm surprised they didn't save this topic for a global Splatfest.

And this isn't even an original Splatfest topic. Back on September 13, 2015, this was splatted out in Splatoon as well, with Team Tsukkomi sweeping both popularity and battles to win 261-239. Needless to say, right out of the gate, it didn't look good for Pearl, who at this point so far has only won ONE Splatfest in the Clout Era.

This was also sponsored by CoroCoro magazine, who publishes the manga based on the game, with Team Blue members Goggles (a boke) and Specs (a tsukkomi) leading their respective teams for the Splatfest event in the comic...the first time a Splatfest has taken place in-universe within its pages.

Because I enjoy the antics of those silly simpletons, I had to choose Team Boke.

I got the gang together for this Splatfest, with myself, Zen, Ranko, and a new streamer called iMad for a 4-way Splatfest collab stream for Team Boke. Right away, we were running like a well-oiled machine! Win! Win! Win!

And then came the Shifty Station...

We lost our first 3 battles on the Shifty...we lost them HARD! It took us a while to realize what we had to do. For the first time, my usual strategy of "ink the home base" failed. I had to chuck it in favor of "take our side's Splat Zones first".

Yes, you read that right. This Shifty has SPLAT ZONES in Turf War! Two in each team's base, and two in mid. Control of those zones is KEY! And to add insult to injury, you also have to keep an eye on your side's inkable wall in mid, because if the opposing team gets it, your base is as good as invaded! It took us a few tries to finally understand that, and even afterward, it was still tough!

Queenout came at 2 hours 24 minutes, for my best time ever for a Japanese Splatfest. Getting carried can be fun sometimes *heh*. Got 3 10x wins out of it too! (4 if you count the post-Queenout one I got at the coffeehouse)

Sadly though, I was worried for my team. Afterward, while watching other streamers, I saw Team Boke getting killed in Pro, and while Boke seemed to win more in Normal, Tsukkomi had more decisive wins. I was sure Tsukkomi got the clout from that. I called it a sweep for Marina because of that.

Luckily for my team, I was dead wrong. Tsukkomi got popularity, but Boke ended up taking both battle categories... it was VERY close though. Had Boke gotten about 0.3% less wins in Normal, we would have lost. Pearl finally gets her second win in the Clout era, avenging Callie for the previous Team Boke loss.

After all, when all is said and done, in this game, we're all just a bunch of silly squids and octos!