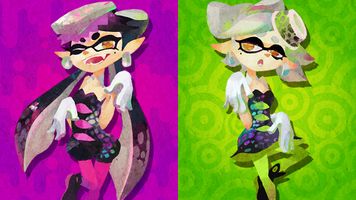 This was the first Splatfest that came up after I first found out about Splatfests in my early days researching Splatoon lore, and had I not been so determined to pronounce the game 'unplayable by me' in August 2015 and not pick the game up again until the following June, I'd have known about them sooner. They seemed to me like an exciting time to splat, and I couldn't wait for the next one!

NOOOOOOOOOOOOO!! That was my birthday weekend! I was planning to be out of town the entire weekend on a small vacation. I took time off work for it. I made plans with friends for it. And now, the FINAL SPLATFEST was going to take place during it!

I briefly considered canceling until I came to my senses and realized how shallow that would be. I considered bringing the Wii U to my friend's place (where I was staying that weekend) so I could splat, but realized her internet wasn't too conducive to online gaming...

So I bit the bullet and accepted that I wouldn't be splatting, but I did not go away empty-handed. I at least grabbed the tee for Team Callie and got 2 Super Sea Snails out of it, and also gave my Miitomo Mii the same tee, which she continued to wear until Miitomo shut down on May 9, 2018.

As for why I chose Team Callie: Frankly, she reminds me a lot of myself -- excitable, perky, a bit self-centered at times but meaning well. It was the natural choice.