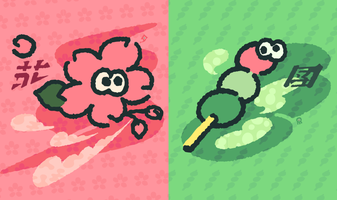 I knew it would happen someday. A Splatfest taking place during one of the major fan conventions I attend here in the Minneapolis area. After the only 3-week gap between Action vs. Comedy and Champion vs. Challenger, I had been afraid of this. But here we are.

And a Japanese Splatfest, no less. Well, I figured, I'll bring my Switch to con and however far I get, I'll get.

I tend to be a more practical sort, so again I went with Marina and Team Dango.

Since the Splatfest on Friday night didn't start until late (Midnight Central Time), It had only been going on for an hour or so by the time parties ended and I went back to my hotel room. I decided to see how the hotel wireless would handle a Japanese Splatfest.

The answer: surprisingly well. I connected rather frequently. Granted, it still wasn't as quick as a domestic Splatfest, but it was enough to not go crazy from waiting. After a couple hours, and getting to Defender, I turned the game off and got some sleep.

The next day, I snuck in play time here and there, mostly in the 2nd floor lobby, where the wi-fi was strongest. One other con attendee saw me playing and assumed it was Breath of the Wild.

His friend turned around and his eyes lit up! "Splatfest! What are the teams?" he excitedly asked. I told him the teams and that it was the Japanese Splatfest. He seemed rather interested. I wish I had kept contact with him. It's always good to meet other Splatoon fans.

By 8pm Central Time, I was 42/99 through Champion, but I had to sadly call off the run. Parties called my name and, well, there are some things that are still more important than the game.

And after all that, we even lost anyway. A rare loss for Marina in Japan.

One more thing, and it's in regard to the Shifty Station that would be used in this and the next Splatfest...as much as I loved this course, can't we all just get... Beyond Thunderdome? ;)