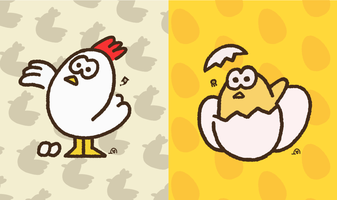 Contrary to some belief, this Splatfest was not about which you prefer to eat, but rather that age old question that's a simple stand-in for the creation vs. evolution debate: "Which came first, the chicken or the egg?"

Scientifically, there is really only one answer. Before chickens, there were proto-chickens. At the same time, an egg that hatches a chicken is a chicken egg. At some point, you need to draw the line between what is and is not a chicken as we understand it. Wherever that line is, is where the last of the proto-chickens laid the evolutionary mutations that became the first chicken eggs.

So yeah, the egg came first. Scientific evidence-backed theory. And keep in mind that in science, a theory is just short of a law, and is taken as scientific fact, since the preponderance of the evidence supports it.

Needless to say, I once again sided with Marina, and I spent the entire lead-up week educating people on this fact of science. Turned out it didn't matter, since the majority of those on Team Chicken only chose that team for the white ink. I'll leave it to your imagination as to why.

Since I knew Zen would want to try and Queen out in one rotation, I decided not to join his team, but I did make up a Team Particle for this Splatfest, and we ended up Queening out on stream in about 3 hours 35 minutes. THUNDERDOME!!!

But this was a bi-regional Splatfest, and I had yet another chance to set a new Queenout record! I got a nice carry by Twitch user SheriffCrazy to give me a nice head start on my way toward Queen on Eurotoon, but had to finish on my own later that afternoon on stream. Didn't get a new personal best, but I got a new 2nd at 3 hours 15 minutes!

And the conclusion of the results showed us just how far Splatfest law goes. Team Chicken won, and Pearl even went to far as to say Splatfest law overrules science! A dark day for science indeed.