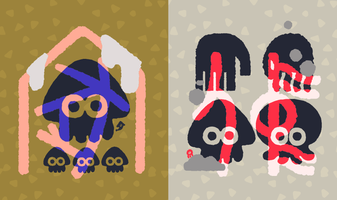 Celebrating the Winter Solstice is a tradition that goes back thousands of years. It's the time of year where we celebrate the fact that the days will start getting longer again... even if it still takes a few months for the temperatures to rebound back to comfortable levels. Most religions tend to hold their largest celebrations at or near the Winter Solstice as well, taking cue from these older traditions and slapping their own special twist on them.

The fictional world of Splatoon is no exception, as holidays called "Squidmas" and "Octivus" have been mentioned as taking place around this time, celebrated by Inklings and Octarians respectively, and whereas there have been two Splatfests centering around the holidays, it's largely only been the North American versions of the games that have referenced these holidays.

That is no longer true. Enter "FrostyFest"!

FrostyFest is the second of what will be 4 special Splatfests before monthly Splatfests end. This Splatfest, scheduled slightly after the holiday season, asks who would you rather spend the holidays with....your family, or your friends?

Because I happen to be on good terms with my bio relatives, and they say your best of friends are the family you make for yourself, I chose Team Family.

After 2 weeks of tee grinding, I dug in that Friday morning on my Japanese toon. At the time, Splatfest was only open in Japan and Europe, and I ran into a problem I had run into before: "East vs. West" matches where my team was horribly outclassed. Zordias came about halfway through and we salvaged it into a 3:15 run, but even with him on the team, it was difficult.

Once the Americans and Australians joined in though, it was a different matter. I basically ended up putting together "dream teams" with some of the best players in my Twitch community, resulting in my first personal best time under two hours for my Eurotoon, and tying my old best with my American toon.

Dana still beat me by 5 minutes though, due to a disconnect I had early on in the Eurotoon run. And she says she's a bad player... my Twitch community disagrees profusely! *heh*

Numerous others on Team Family had similar quick Queenouts...in Normal, anyway. Pro was an entirely other story, as Team Friends seemed to just dominate in the higher bracket.

When Splatfest ended, it was obvious that team Family had the popular vote, and Team Friends had Pro. Normal was a bit trickier to call, but I had thought that perhaps we pulled it off, so I called the Splatfest for Team Family.

I was wrong. Team Friends took Normal as well, with a semi-comfortable 52-48 score.

Marina's utter domination of the Clout Era continues (7-1)...and now, for the first time since Spring 2018, Marina took the lead in cumulative Splatfest victories across all regions, having won 22 of the 43 Splatfests so far in Splatoon 2...if you count Team Ketchup's combined-result victory, that is.

Though, to be frank, even if I don't always choose her teams (since I don't choose by idol), I still feel happy for Marina. I just like her overall as a character, even more since finding out her backstory in Octo Expansion, since I always love a good story of redemption. And the presence of Flooders in the Shifty Station this time makes sense as well, since she was on the design team for them and all, now using her creations for sport instead of submission. The story of Marina Ida just warms my heart all sorts of ways.

Keep your streak going, Marina. You deserve it! :)