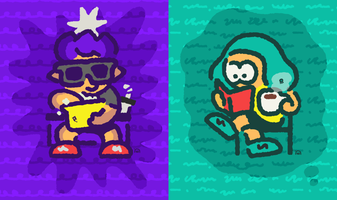 Books and I usually don't get along. It's not that I can't read, it's just that a combination of childhood ADHD, and a LOT of utterly dry and boring books I was forced to read for school, turned me into a mostly book-hostile person. Unless a book can jump out at me and grab me in the first chapter, I lose interest fast. My short attention span just can't sit still for a lot of build-up.

A good movie, on the other hand, will grab you within the first 5-10 minutes, and never let go until the credits run. It's the perfect way to get in a good story in limited time, and whereas it tends to be passive entertainment, you can still do other things while watching a film, like cook dinner or play a simple video game.

Damn, that means I have to go with Pearl again! At least they have indigo ink. That's almost purple.

To cap off the week leading into Splatfest, I actually did something I had never done before. I decided to attempt to draw the same art on both the Japan and Europe versions. The art featured an inkling complaining about the Uniqlo ad playing in the movie theater. It seemed funny at the time.

Splatfest started bright and early at 8am Central Time Saturday morning, with the same Shifty Station used for the Uniqlo Splatfest, so here I had the advantage, as I was already used to that course. I noticed I was winning more often than usual, and by the time I Queened out...

3 hours 16 minutes! Shaved 4 minutes off my personal best! I was not expecting that, especially not from an overseas Splatfest! And once again, the day was saved!

Due to all the mirror matches, I knew Film had the popular vote by a landslide, which usually means the battles don't go our way, but we had an overwhelming percentage (53%) in team play to hand Pearl yet another victory in Europe.

At this point, people started noticing a pattern of these wins...