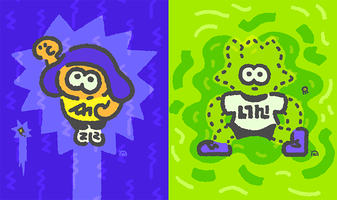 A bit of background on why I chose Team Flight: At the time this Splatfest was announced, there was a series of posts in Inkopolis Square North America supportive of the LGBT community. Naturally, the USA being... the USA... this triggered a lot of closed-minded people to loudly demand that the posts stop. Posts on both sides got reported but by and large, Nintendo only removed non-supportive posts.

So I chose Team Flight, as in "LGBT will not be invisible! Fly high and be proud!"

This time, once it started, I just played through until I Queened out, and slept afterward. Interestingly enough, this was the first Splatfest in which I played some of it in docked mode. (My Team Ketchup run was entirely in handheld mode)

Saturday night 1am Central Time came...and went, with no results, and I wasn't the only one curious about that, there were numerous posts in the Square asking how long until the results would be released. What we weren't told is that, like "Cake vs. Ice Cream", and unlike "Mayo vs. Ketchup", the North American and European results would be combined, and Europe wouldn't be done until 9am Central Time, meaning it wouldn't be until 11am that we'd see results. So, I slept, and made sure I was awake for the results.

This time, I got my first sweet taste of Splatfest victory!

But this Splatfest story has a tangent, as just before this Splatfest started, it was announced that Japan would be getting a different one the following week. Until that point, I had thought the themes would be the same across all regions.

But I was wrong, and I was about to ultimately indulge what had become my biggest video game obsession ever.