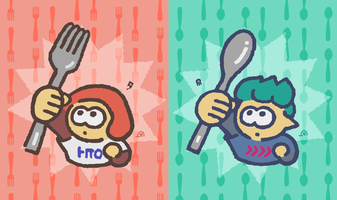 That was my first reaction upon hearing this theme. It seemed as if the creative teams from North America and Europe had switched places! "Fork vs Spoon"? How lame can a Splatfest get? You can't really compare them! They have different uses!

Then came the Spaghetti discussion, and it all became clear.

As for my own leanings, I do tend to use forks more often than spoons in most applications. In our household, we always seem to be running out of forks before it's time to start the dishwasher, so it was really no contest. I grabbed my Team Fork tee and started the chunk grind.

Cue the memes afterward, from Team Spoon's references to The Tick, to Team Fork dropping numerous puns related to a certain four-letter expletive, to the inevitable "Spoon 2: Fork Expansion", and suddenly, this lame little theme was looking like a lot of actual fun.

Perhaps we need to trust our Nintendo overlords a bit more.

When Splatfest started, I got my team together and dug in. It was the same Shifty Station from the weekend prior, and I think we finally found a good strategy for it. We had an Overflosher guarding the gate switch, another taking care of mid, and the combo of my Aerospray and my partner's Bold Marker quickly taking care of the home base (and we'd move to mid after the home base was covered. It worked.

And then we lost one of the Overfloshers to fatigue, and our strategy fell apart without that second overpowered delight. Oh well, but we still managed to have a winning record overall, and I Queened out in 2 hours 41 minutes, tying my second-fastest time (and for my partner, it was her fastest time!)

In all that time, we only had one mirror match. On the other hand, friends of mine on Team Spoon, and streamers I were watching from Team Spoon didn't seem to have any at all. It looked like it would be a popularity squeaker for Team Fork, but too close to call. That, combined with the fact that I kept seeing mostly wins for Team Fork, and I was calling it a sweep for Pearl.

Then again, I called last weekend a double-sweep for Marina, and you know what happened there. *heh*

Then the results came in, and the only thing I was really wrong about was the popularity. Team Spoon took it, but barely, with only about 53% of the vote. Team Fork's battle wins, however, were the real deciding factor, and Pearl takes another victory.

Counting all regions, that's 5 losses in a row for Marina. She can't even win much in Japan anymore.

Marina is starting to get REALLY salty about it, and Pearl's reply sure didn't help.

I swear, if this causes a real rift between Off The Hook, I think I'm going to cry. Nintendo, don't sink this ship! Please!