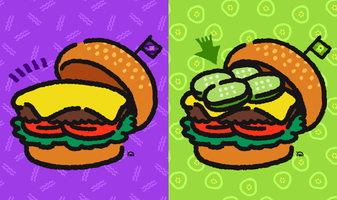 There's nothing more American these days, when it comes to fast food, as the cheeseburger. All the biggest fast-food burger franchises started in America! Burgers and fries are as iconic as hot dogs and relish. And any American worth their red, white, and blue tops their cheeseburger with some crunchy dill pickles!

Which I guess is why instead they chose to run this Splatfest only in Europe. Perhaps Europeans are a lot more fussy when it comes to pickles for this to be anything but a popular vote blowout.

Being an American, and a pickle-lover, I once again sided with Marina. I'd been doing that a lot lately. I just love that tasty crunch.

I cranked up the streamer and started right in when Splatfest opened. Once again, it was the same Shifty Station as the week before, so I had the edge there, and after all was said and done, I had a first for me: an overwhelming winning Splatfest record!

But what was even more amazing was what that meant! I had a new Queenout personal best of 2 hours 50 minutes, smashing my old best by almost half an hour! Perhaps Europeans are easier to play against? Either way, I took this as a good omen. If I had this easy a time against team Gherk-OUT, then we should have this Splatfest in the bag!

Imagine my surprise when Team Gherk-OUT not only won, not only SWEPT (for Pearl's THIRD sweep!), but WASTED US! Team play was 55%-45%! Seriously, who wins a battle category by that much?!?

My next burger had extra pickles. Just out of spite.