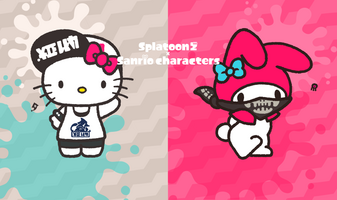 Apparently this Splatfest needed a time out.

Granted, the week break before the finals was due to the Mario Tennis Aces preview, but it was nice to have the Splatfest Tee to grind for more than a couple days this time around.

Needless to say, I wanted Hello Kitty to take it all anyway, so I chose her again.

We got the band back together again with me, Zen, iMad, and Kat for the finals, and we struggled a bit, but not too much. We also had a LOT of mirror matches.

A LOT of mirror matches!

Yeah, it was clear who was getting the popular vote this time around. Though the fact that we struggled more against our own team than Team My Melody was good to see. It really gave me hope for the results.

Then Kat had to leave...and we had to solo.

Granted, not as bad as Team Lemon, but it was not quite as easy to match this time around. More disconnects, but not overly so. Still Queened out with a 3h 47m time despite the difficulty connecting.

But my heart sank when I noticed that Solo Team My Melody was....more difficult to beat. As my Splatfest Power dropped further and further, I feared for my team.

And it turned out my fear was justified, but just barely, as battlewise, the results showed Team My Melody took both battle categories by razor-thin margins, some of the thinnest margins yet for Splatoon 2 Splatfests!