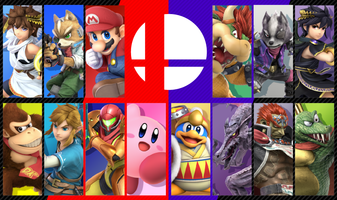 Before 2015, I had never played a single lick of Super Smash Bros. Sure I knew of the game, and had watched others play Melee and Brawl, but I never had an N64, Game Cube, or Wii before that time, so when I got my Wii U, I made sure we got Super Smash Bros. for it (and our 3DS systems, too), so "Smash 4" pretty much became the one I was used to, and as such, I also never got used to playing it with the storied Game Cube controller, either.

My main in "Smash 4" was Zero Suit Samus. And I sucked at it. Still do, to be frank. Even the few times I played it on my stream, I'd always get my butt kicked, though I'd win the occasional game. VERY occasional.

So since I sucked at the game anyway, I figured I'd main Inkling in Super Smash Bros. Ultimate, and it turns out she's very fun and easy to play...even if I do still get my butt kicked by the skilled Smash vets in my Twitch community.

That aside, we didn't initially think we were going to get a Splatfest in December 2018. Nintendo announced FrostyFest very early December, and we figured that would be the next one, as too many people would be spending December playing Smash.

But on December 7th, not only did Smash Ultimate come out, so did this Splatfest announcement!

Needless to say, since my choices of main were "good guys", I went for Team Hero. After all, who roots for the villain? Only villains do that!! ;)

And I do have to say the Shifty Station this time around was far better than the past three. There was actually a sizable mid, and a lot of open space, and I got more use out of the Dash tracks than I thought I would. They were good for both quick escapes...or super-launching a bomb or two.

Luck was with me for my first two Queen runs (even if Dana once again Queened out before I did), but we had a lot of mirror matches...though, so did Team Villain, but by the time things settled down, it became more obvious that Team Hero had the popular vote.

My third Queenout started great...and then we lost our tank. Let me explain for those who don't know... the "tank" is the one in the party whose job it is to make the rest of the other team pay attention to them and only them. There was me, the inker...Dan, the player-splatter...and then there was Zordias, our tank. It was his job to break into the enemy home base and start inking, with the strategy being that the other team would panic, rush home, and try to get him...and it worked! We were on pace to match the other two Queenout times!

Then he left, and things went to crap. Without our tank, mirror matches consisted of us being walked all over, and matches against Team Villain went better as a whole, but we split about 50/50.

Though, during the 2nd Queenout, I did still manage to win three 10x matches, the first Splatfest where I ever won such a match! We proudly marched back out into the Square and grabbed our pix!

This was hard to call for me, but judging by my own play, and that of other Twitch streamers, I decided to call it a just BARELY sweep for Pearl.

Imagine my surprise when Marina not only won...but it wasn't even close in the clout. Again, no 51-49s here.

Marina has now won all but one Splatfest in the Clout Era.

Fear the cute ones.