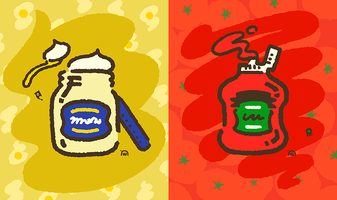 I did not take part in the testfire Splatfest in July 2017, mainly because I hadn't gotten my Nintendo Switch yet. back then, if you wanted one, you had to keep a close eye on when your local GameStop would get them, and even then, purchase a bundle pack. It was a difficult time to get a Switch.

But when Splatoon 2 was released, I put my hunt on high gear, and as luck would have it, I was able to mail-order Switches for myself and my partner. I got a Splatoon 2 bundle for me and a Mario Kart 8 Deluxe bundle for her, and separately ordered a second copy of each game, so we would both have both games.

"DING DING DING! We have a Splatfest coming!!"

...I may have silently squeed in wide-eyed amazement. I don't remember. I did know the game was only 12 days old, so this must be the first Splatfest, I figured (I didn't know yet about the testfire Splatfest).

I was home. I was finally going to take part in a Splatfest! Being a fan of Miracle Whip, I chose... Team Ketchup! Because seriously, mayo is just dull.

When the time came, I dug right in. I fell in love with the atmosphere, the music (both Square and maps), and I just wanted to splat all day... but I couldn't, because I had committed to Valleyfair that Saturday afternoon. I splatted my way to Defender that night, slept, and resumed all the way to Champion 33/99 just before we left.

Thinking Champion was the highest rank, I rested on my laurels and went to Valleyfair.

Upon getting home (3 hours before Splatfest ended), I decided to do some more splatting and saw ranks of "King" and "Queen". Yikes! I had to max out this bar and quick! a bit over 2 hours later, I was a Ketchup Queen, with very very few non-mirror matches, which I found out meant Ketchup likely had a high popularity rating.

So I looked up how Splatfests were scored in the old game, and got excited because it seemed that such a high popularity would mean Ketchup would almost be guaranteed to win!

Then came the results, and I found out the hard truth. Splatfests this time were scored not by percentage points, but by CATEGORY points, and there were three categories so...never a tie, and Team Mayo's prowess on the splatterfield in two categories got them the win. Results were similar in the EU, but in Japan, Mayo won popularity and lost team play, but basically Mayo won around the world.

Sighing, I took my 21 Super Sea Snails and awaited the next time.

But there is one coda to this, as in January 2018, the raw numbers of Splatfest participation were released for all Splatfests from this one to the then-most-recent one. Curious, I decided to crunch the numbers for what was Splatoon 2's only "multi-region" Splatfest to that date with segregated results.

Because Ketchup won popularity by a landslide in the West, it more than overcame Mayo's slight edge in popularity in the East, taking the popular vote 55%-45%. On the other hand, Japanese players played over 130,000 team-matched battles, compared to approximately only 15,000 in the other two regions combined. This meant overall, Ketchup took this category too, with a 51%-49% win. Mayo, having won solo-matched play in all 3 regions, obviously took that category 51%-49%.

Team Ketchup was the true winner of the Splatfest after all, and I will defend that to my dying day! *heh*