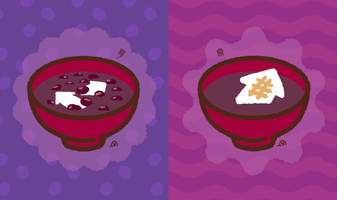 Another Japanese food-based Splatfest was among us!

But like in March, this wasn't just any food fest. This was about sweet red bean paste, which during this time of the year is made into a soup with some fried mochi for the Moon Viewing Festival (if you were wondering why the moon was suddenly visible in Inkopolis Square).

The question was...do you like the paste chunky style (Tsubuan, with bits of whole bean in it)), or smooth style (Koshian, ground into a fine spread).

I had no idea. I had never tried the paste before, so I went to my local United Noodle and bought a package of both, and something neutral to dip in it. Turned out that eating the paste by itself is rather rich, like eating cookie dough or fudge.

And damn was it delicious...both kinds. It was a tough decision, but I had to slightly go with Koshian. Marina apparently knows her bean paste. The only problem was that it filled me up like crazy, and I still (as of this writing) have a significant amount of the paste left.

Though, due to the holiday weekend, the later start time of the Splatfest meant I would be getting the results while I'm at work. I figured as long as I can Queen out, I'm fine.

Things started looking up when Splatfest started...the ticker was constantly showing wins for Team Koshian...at first. Then Tsubuan just seemed to rack up the wins on the ticker, and my heart sank.

And also, cue more of the falling to my doom on the Bounce Pads.

Over 4 hours later, I finally Queened out. The cavalcade of suck was over. My first losing Splatfest record in a long time, and watching others on Twitch on Koshian have similar troubles, well... it didn't look good. I predicted the Splatfest for Pearl, with Marina getting only the popular vote.

But I would be made the fool.

Marina hecking SWEPT ANOTHER SPLATFEST! The first time ever that every Splatfest in a given month was a sweep, and Marina took both of them! That girl is no longer playin' around, and I took home the spoils!

And now...now that I know how to make the soup (it's surprisingly easy), I need some mochi.