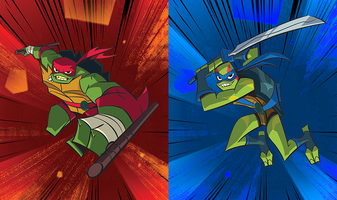 The Teenage Mutant Ninja Turtles were never really my nostalgia. The comic series from 1984 (which was dark, gritty, and aimed at mature audiences) was under my radar until it became too expensive to purchase, and when the first animated series came three years later, I was already 15, far older than the demographic, which created a dichotomy in my head. When the first animated series was announced, my reaction was "Ninja Turtles? As a kids show?!?" I watched the odd episode now and then, but was never really a fan.

That said though, when Nintendo decided to introduce the concept of a Splatfest Tournament, Nickelodeon decided to sponsor the first one, and revolve it around their upcoming show Rise of the Teenage Mutant Ninja Turtles, which is likely the biggest deviation yet from the original source material (each turtle being a different species of turtle, and some weapon changes). Obviously, the question would be "Which is your favorite Ninja Turtle?", but with four turtles, this new concept would get its test run. Raphael vs. Leonardo the first week, Michelangelo vs. Donatello the second week, and the winners splat it out in the finals for the third week. I could only call this a "Mega-Splatfest"!

This theme for the first Splatfest tournament is perfect, as Ninja Turtles have pretty much remained in the public eye in one form or another for kids over the last 30 years, which means current kids all the way to younger Generation X'ers can feel connected to this theme.

Even I, as an older member of Generation X, at least have my favorite turtles, despite not being much of a fan of the cartoons. For Week 1, that would be Leonardo, the leader of the group...or at least he was in the comics and the original animated series. He was the strategist, the tactician, the main overall brains of the group. granted, this dynamic would change later on as later series and even the comics would eventually make Raph the leader (either by default or by battling Leo for it), but Raph is pretty much the main brawn and hothead, and I always will prefer brain over brawn. Apparently, so did the greater community, as Team Leo did take the popular vote.

I started Splatfest with a team, but unfortunately my teammates couldn't stay until the end for one reason or another, so I ended with solo play, and...it was very rough going, as game would imitate art. I couldn't get many wins to save my life, and it resulted an a Queenout of over 4 hours! My second Queenout with my EU toon fared better (got my 3rd-best time of 3 hours 4 minutes), but I ended that one with a team, and team play was still very difficult.

I knew Team Raph had this before the Splatfest was even over, and I even gave a rare non-51-to-49 prediction for team play after it ended. I was right, and more than that, I underestimated just how much Team Raph would win by. It was basically a blowout, and Raph advances to the finals.

So I picked up my 42 snails and started awaiting Week 2. Whereas I like Leonardo enough, my true favorite turtle was always Donatello, the gadget geek (though you may not want to know his fate in the comics...it's pretty brutal). I just hope the better players agree this time, now that they won't have a double-entendre ink color to choose.