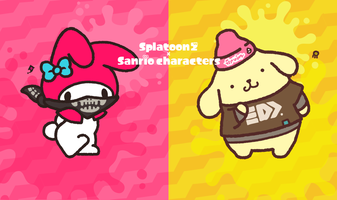 One thing I never mentioned from last time: I knew nothing about the personalities of these Sanrio characters. Sure I know OF many of the characters, but as to their personalities, traits, motivations... nothing.

That's why to make this decision, I had to do some research. Sure both My Melody and Pompompurin look cute, but which one would I jive more with?

I chose My Melody...didn't even get to read Pompompurin's bio. Friends who hadn't voted yet were treated to the line, "Come to the pink side. We have cookies!"

But there was still one lingering question about this Splatfest, ever since I found out about the matching bug that apparently plagued the last Splatfest: was the previous week's quick matching due to a bug?

I didn't find out right away, as I started with a team for another Multi-Twitch collaboration, but it wouldn't last forever, as one of our team had to leave after the first rotation ended. Other multiregioning friends from the East Coast USA on Team Pompompurin reported that matching was not quick like the week before.

My heart sank...I had to solo it from here. I still had over 60 points to Queen. Would I be stuck here for another 5-6 hours? I audibly swallowed, and waited for the long w--

Um...ok...and the teams were well-matched, at that! Could it be?

Looks like it wasn't just a bug fluke after all! WHEEEE!!!

Later on, it turned out that there was more difficulty than the week before (I had a couple timeouts), but overall it looks like things had gotten better. East Coast was still getting some long waits, but nowhere near as long as they used to be (from 90 mins betwen matches to about 10 mins at most). After all was said and done, I ended up Queening out those last 60-odd solo points at about the same rate I had been getting points with the team, ending in a tie for my 5th best personal Queenout time.

I finally have a Japanese Splatfest among my top 5 Queenouts! I think it's now safe to say the days of the 15-hour Queenout are officially over. I even updated my FAQ to reflect this. These are great days indeed to be a multiregioner!

But another big moment came with the results, as Pearl, who was sponsoring My Melody, ended up once again winning by battles alone! Between Marina's wins the prior week and the week before, and Pearl's wins here and the week before, it would seem the dreaded "idol meme" may finally be put to rest.

You are now free to vote your consciences, squid kids! Onward to the finals!