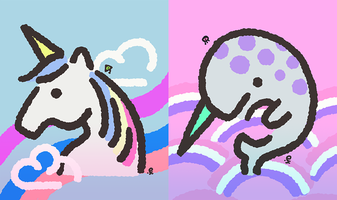 This was a rather odd theme for a Splatfest.

Seriously...exactly what do unicorns and narwhals have in common?

Unicorns are mythical, magical creatures of lore and adventure, supposeldy granting wishes/powers/etc to whoever is lucky enough to come across one. They are a staple of many a fantasy story told...also, they don't exist.

Narwhals, on the other hand, DO exist, but when was the last time you came across a work of fiction touting the magical properties of the narwhal? They are basically just whales with long spiral tusks protruding from their heads.

And that's another thing, whereas a unicorn's cranial protrusion is a horn, a narwhal's is actually a tusk.

Like I implied, not much in common at all. They likely just paired these two animals against each other because they both have large spiral protrusions growing out of their heads. My guess is they needed something to go up against the unicorn.

And I can see why they wanted to bring unicorns in. The unicorn is one of the big symbols of LGBT Pride month, especially since a very large portion of the Splatoon fanbase in the Western world identifies as such. June is generally considered to be Pride month. The ink colors were the pastel colors of the trans pride flag, and many other colors associated with various LGBT flags were present on the announcement graphic.

Now I may be lesbian, but I'm also a bit of a realist, so I had to choose Team Narwhal. Because reality.

This was also a rather busy weekend for me, as every region got its own Splatfest, and they were all held on the same weekend, so I wanted to get this Queened out quickly so I could get right to the next Splatfest!

Sadly though, of my Twitch community, all my real heavy hitters chose Team Unicorn.

I put together a team of myself, Dana, Ranko, and SplatTV and we went at it. It was tough chewing for a while, and we didn't have too much in the way of synergy. Far too many close losses for our taste, and we didn't Queen out for nearly 3 hours!

I've been spoiled by the superteams I've been able to put together in the past. At least we got a fun stream and voice chat out of it, and there may or may not have been alcohol present to soften the blow of defeat. *heh*

And the Shifty Station was interesting in that it brought back a mechanic from Mahi-Mahi Resort in the old game. About halfway through the match, the water surrounding the stage would drop, revealing more territory to cover. Add Inkfurlers to the mix, and you had a memorable Shifty, indeed. I fell to my doom more than once after charging a Booyah Bomb over an inkfurler that retracted under me.

And as stated earlier, I had more Splatfest to take care of afterward. I was worried about my sleep schedule. At least when we DID get a 10x match, we won it.

Due to our lengthy Queenout, and seeing far more 10x and 100x posts from Team Unicorn on Twitter, and watching others on Twitch struggle with Team Narwhal, I felt sure that Team Unicorn would take clout, and by a rather large margin.

I couldn't have been more wrong. Instead, Team Narwhal brought out the brooms for a 3-0 category sweep against the fictional equines! Imagine my shock!

This meant that Marina takes the prize for most Splatfests won in Splatoon 2. Taking the 27-23 lead, and only 3 Splatfests to go (2 of which were this same weekend), there was no way for Pearl to catch up.

So reality won out over fantasy after all. A bit of a refreshing take. As much as I like the imagery of unicorns and rainbows this month, I also like to stay grounded in an era where even truth is so easily dismissed.

Like the truth of who I am, and how years ago, I was brave enough to finally face that truth.

Like so many others who have had to summon up that bravery over the last 50 years of the modern LGBT civil rights movement.