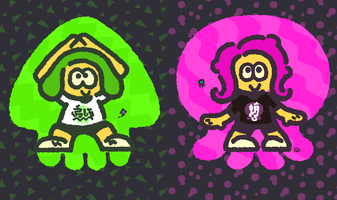 Nintendo needed to do something big to commemorate the first anniversary of the release of Splatoon 2, and given that Octo Expansion was still fresh in our minds, this Splatfest seemed like the natural choice.

However, when this Splatfest was announced, I was really worried for the lore.

Here we were, Squids and Octopuses living together in harmony finally, due to the Calamari Inkantation, and then this happens.

The reason why I was worried is because that due to Splatfest law, the winner of the Splatfest is legally "better" than the loser. That law has specifically been invoked twice: during Cake vs. Ice Cream, when Marina pointed it out, and during Chicken vs. Egg, when Pearl very adamantly pointed it out in a warning to Marina.

Would Nintendo go there with this Splatfest, given the state of the real world? The opening banter was not promising, when Marina said that this topic was "dangerous". I started to fear for the cohesion of Off the Hook I braced myself for the two-week tee grind.

I chose Octopus, mainly because in lore, they worked much harder to free themselves from their totalitarian oppression. As a show of cross-species peace, one of my squid toons posed in front of the board wearing an Octopus tee.

I will say this about the community though: given the talk on Twitter about "race war" and "Great Turf War II", most people in the Square posted supporting and friendly art about this Splatfest, playing on the renewed peace and friendships between the two species. It was heartwarning.

Then the Splatfest itself came, and I struggled... first with teams, and then on solo matching. I was lucky to even have one of my three queenouts make my top 10 fastest list. But the big highlight of this Splatfest was its Shifty Station...

The Shifty Station for this Splatfest was really fun and different. Whereas the "Thunderdome" station focused on closing parts of the stage off, this one was all about opening the stage via 6 tentacled wall switches, and frankly, I preferred it when all the walls were down, both on the opposing team and my own. It made for a nice open field that allowed for a lot of ink and a lot of escape routes.

But I knew Team Squid had it in the bag. I could tell from all the Twitch videos I watched. I guess even lorewise it makes sense, since the Octolings are new to Turf War as a sport. The results just confirmed that prediction.

I braced for the post-fest banter, and... Nintendo left the lore implications alone. Pearl had a couple lines celebrating her win, Marina congratulated Team Octopus for their effort as well, they talked a bit about their first year hosting Inkopolis News, and {(on the Japanese text) Pearl revealed she needed a total of 5 training wheels as a kid. Nothing about Splatfest law. Nothing about species superiority. Just a nice feel-good segment.

Nintendo, in the end, didn't go THERE, and for that I am very grateful.

One year of Splatfests down for Splatoon 2, one year to go. Here's to more Splatfest fun!

...and here's to hope that I'll still be able to multiregion 2 months from now *heh*