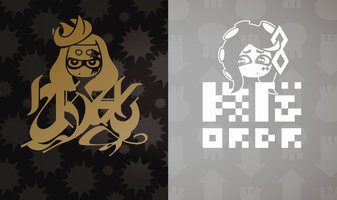 The Splatocalypse is upon us!

We knew this was coming for some time. In fact, we knew as soon as the game was released that there would only be two years' worth of Splatfests. However, this did not make the inevitability any easier to take.

Splatfest is my favorite part of Splatoon in general. I almost cancelled a vacation to splat in Callie vs. Marie (though saner heads prevailed and I took that vacation anyway). I purchased all three regions of Splatoon 2 just so I could have more Splatfest. I love the atmosphere, I love the music, I love the camaraderie. On my Twitch channel, I turned it into an event where most of my community can get together and just have a grand old time!

At E3, Mr. Nogami asked us what sort of world we want for the inklings and their friends? Chaos or Order? Now, I took this to mean that the result would have some huge effect on the lore for the next game. I was ready to assume the worst, thinking that if Chaos won, we'd get a "Mad Max" style anarchy, and if Order won, we'd get a "1984" style dystopia.

So I chose based on which would be easier to recover from if toppled. That would be the dystopian Order, as those sort of dystopias tend to at least keep the infrastructure running.

Despite the announcement banter suggesting nothing along the lines of wholesale world change, I threw myself into the role on my stream, praising "Dear Leader Marina" and saluting "The Order". My partner wanted to choose Chaos, but (a) she wanted to play with me and (b) she couldn't argue with the logic of "you can't 'chaos' a pizza!"

Also as predicted, they gave us about 3 weeks to level the Splatfest Tees (one week for each day of the Splatfest, as had been established earlier...with Squid vs. Octopus being the only anomaly (2 weeks for a 1-day Splatfest).

They were really hyping this up even in-game, as stickers with people's art were showing up more and more in the Square, stuck on buildings, on the ground, on windows, even on the Splatfest podium itself! And when Off The Hook's stage was set the day before, they appeared there, too!

So with my Eye of Justice gear all set where I wanted it, I dug into this Splatfest with all my gusto, and... noticed that even with some of the best players from my community, we more often than not got our butts kicked! Elsewhere on Twitch, I saw Team Chaos players having a tougher time in mirror matches than against Team Order.

...we were doomed. Inkopolis was doomed.

My first Queenout run got us my first ever 100x win....but then we dropped FOUR 10x battles. The dropping continued on my second run, but we did get at least one 10x win out of it. We ended up getting another 100x victory in the third run, which was the only one to appear on my Top 10 Queenouts list, being the only one that was sub-2-hours. It was nice to play on the older Shifty Stations again, and we even got another run at "THUNDERDOME"! Though during one match at the dome, we took both sides and mid and STILL lost. Still wondering how that happened!

As for the final Shifty, "Dear Senpai" (since it was lovingly crafted by Marina as a dedication to her "Senpai" :) ), we actually won more than we lost there, as the mechanics weren't too hard to figure out, and we even got a couple victories despite our opponents getting the Princess Cannon. It definitely was one of the most open of the Shiftys, with a lot of space to move around, and not many places to get caught unaware. Once of my fave Shiftys.

Just after that third Queenout, I decided to get Amiibo pics on stage with Pearl and Marina, as it would be my last chance to do so. Looking back, I now wish I didn't have the Eye of Justice on while I did it. *lol*

I woke up in time for the final rotation and actually did ok with it, but we got a 10x for our final match. Now, as you know, I like to get snaps of my 10x/100x wins, but this one was coming down to the wire! I was almost hoping we'd lose it so I wouldn't have to worry about missing the photo! But we won the match!

30 SECONDS! Judd was giving us the results!
15 SECONDS! I backed out of the lobby as fast as I could.
5 SECONDS to run from the Inkopolis Square spawn point to the Splatfest podium!!!

I got the picture...with less than a second to spare!

I continued streaming afterward, deciding to kill the two-hour results wait by taking my viewers on a tour of my screenshots (most of them Splatfest-related) over the last two years. There were a lot of feels had, but it turns out that was only the start of the feels.

As I predicted, Chaos swept the Splatfest. It wasn't hard to figure out who had the edge in this. I trust a lot of the memelords, hardcores, and edgelords chose Chaos, and by and large, they tend to be the better players. Just as I was reeling from the loss, the feels train was just pulling into the station...

"It's time for Off The Hook to break... into new genres of music! Flip-hop! Cuddlecore!..."

I hadn't fully cried yet though, and I was wondering when it would hit me. It wouldn't be until Nintendo released the Splatfest tribute video, set to Into the Light...

...at the end of the video, was one of the cutest pictures I've ever seen of Off The Hook: Pearl and Marina having a cute moment, with Pearl wearing Marina's "Order" headphones, while placing her "Chaos" crown on Marina's head, and Marina just looked like the happiest girl in the whole world...

...and I just lost it, right then and there. It finally hit me that this was the end of one of the best gaming event experiences of my life...at least for now. Splatoon 3, and therefore the next Splatfest, is still years away, and I already couldn't wait.

...it's not the same, and it won't be the same. There's just something about the event as a whole that hits my happy place. Maybe it's just the party atmosphere. Maybe it's having shared it with people all around the world both on Twitter and on Reddit. Maybe because it was so central to my streaming that I know I'm going to really miss it.

It's just that whole feeling of "what do I do now?" Chaos not only won, but it slammed me right in the face, as pretty soon (after my Prestige Push), I need to really think of what I want to do with my Twitch channel until Splatoon 3 comes out. It's really uncharted territory for me as a streamer, and as a gamer, and I admit I'm a bit apprehensive. I don't want to lose interest in the franchise, and part of me is afraid that without a real goal, I'll drift from it.

I don't want that to happen. I want to stay in the loop. I want to keep having fun with this. I want to stay connected with the competitive scene too (even if I'm only in the scene for funsies). I have some ideas to keep things interesting but even those will only take me just so far.

These last two years have been such a thrill-filled fun ride, and despite knowing from the start that it would eventually end, and exactly when it would end, I'm still not ready for it to end.

Right now I'm just glad that all of you have been here with me on this wild ride, and whether Splatoon 3 ends up being another Switch title, or they wait for the next console, I expect to be right back here with you, anxiously awaiting the next Splatfest!