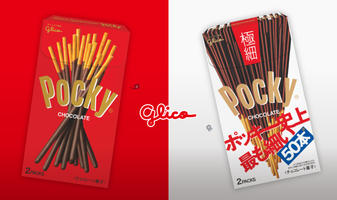 I used to be a hardcore anime fan. Still am, to an extent, though mostly of shows that premiered in the 1970s-90s. Went to my first anime convention (Otakon) in 1997, and it was there that I discovered the food that has since become one of fandom's biggest snacks...in or out of Japan...

Little thin lightly-toasted pretzel biscuits covered with chocolate...or strawberry cream...or cookies-n-cream-- basically, they make a lot of flavors. But this Splatfest focused on the oldest and newest flavors of the line: the original chocolate, and the new "Ultra Slim", which is basically the original chocolate, just dipped on thinner pretzel sticks, 50 to a box instead of 25.

After grabbing some original Pocky at It'Sugar and some Ultra Slim at Tomodachi, I was ready to have the side-by-side taste test. Frankly, there isn't much difference between the two, tastewise. Once is truly just...thinner.

I can't make a TASTE test based on thinness.

But I had to choose one, and I went for the classic chocolate. If you're not going to make any real significant changes, don't mess with the classic.

And for the record, the meme about the "bad Thai Pocky" is dead. The original I had was from the Thailand plant, the Ultra Slim I had was from Japan. They tasted the same. They finally standardized the taste of the chocolate between their factories, so you can rest assured that nowadays...Pocky is Pocky.

But we're here to talk about the Splatfest itself. It actually took place on the weekend of "Pocky Day" in Japan, albeit a day early (Pocky Day is November 11 each year), as part of a major cross-promotion campaign between Nintendo and Glico. Whereas I couldn't partake in the other festivities, I could still splat!

It was a struggle, however, especially on the Shifty Station. I won very few, if any, matches on that map, and certainly not the 10x match I was in (I still have a winless record with 10x matches). Again, it was yet another "control the realy small mid" map that really bunched my nerves...

...and I'll have to deal with it the next week...AND the week after. Dear Zapfish, it's hell.

How I managed a Queenout time of only just over 03:30, I'll never know. Maybe I should have played Pro for a bit, as my team seemed to fare better there.

At least I got to bring the red ink "BLOOD" meme to Japan. *heh*

I knew where this was heading, and I called it for Team Ultra Slim to get popularity and Normal mode. I was right, only underestimating Ultra Slim's popularity by 4%.

Marina has now won 4 in a row, after Pearl won the previous 5, coming back within one point of re-tying the standings. Marina still has yet to lose a Splatfest under the new system, which has some people crying foul. But let's look at those results again:

Folks, isn't this what you were asking for? More variety in the types of results? If the problem you had was that the popular team kept losing, you should be relieved by these results! It's not as predictable anymore.

I swear, some people are never satisfied.

Well, while they're off in their corner complaining, I'll be over here...