DJ Particle Splatfest Musing: Eat It vs. Save It 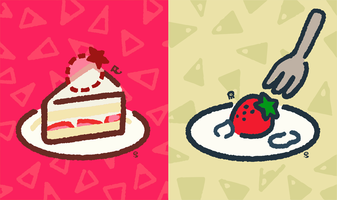 I feel I must apologize to "Weird Al" Yankovic...

After all, Pearl's side of this contest was literally named the same as a "Weird Al" song, if not necessarily named *after* it. But I had to betray my comedy music background and go with what I actually do in real life.

A good meal should be a build-up of flavor. Let the tongue taste more and more until the end of the meal becomes an explosion of taste! And then, of course, there is always dessert! That's why I chose Team Save It!

Lay off the "Weird Al", and put on some Vanessa Williams!

When the Splatfest itself started, of course we had that same god-forsaken Shifty Station from the last two weeks, but this time I noticed something else. I was actually winning against Team Eat It!

I did not lose a single match to Team Eat It.

The fact that for the length of a Queenout and change I only battled against them a total of 6 times is notwithstanding. That's how lopsided the popular vote was! For a while, I had thought Team Save It hit that magic 70% of the vote, until I saw things settle down a bit later. Still a lot of mirror matches on Team Save It, just not as much. I also actually went through a Splatfest without a single 10x match.

The results were actually predictable, despite the game-historical significance of the result. Not only did Marina easily sweep, but it was her first win on a Europe-only Splatfest!

So now that we have 6 Splatfests under the new system, let's look at some stats...

The meme is dead... long live the new meme? We'll see what happens in next month's likely global Splatfest!