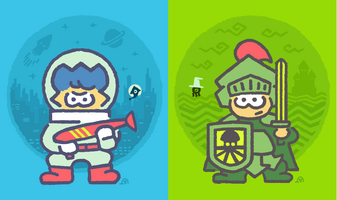 Science Fiction in media is in my blood. I collected Star Wars memorabilia when I was little. My first anime were sci-fi classics like Yamato, Grendizer, and Gaiking (albeit the crappy American dubs thereof). My first true fannish obsession was V, to the point where I created a Mary Sue for the universe (hey, I was 10). Doctor Who and Star Trek would soon follow.

Fantasy, not so much. Never cared much for D&D, Lord of the Rings, anything like that. The only real exception would be Warcraft, but even that tends to have branches in numerous genres, including Sci-Fi (Orcs, Draenei, and the Legion are basically aliens from outer space in the Warcraft universe...seriously)

After all that introduction, do I need to tell you which side I chose in this Splatfest?

In the lead up week to Splatfest, I drew single-panel parodies of numerous Sci-Fi staples in the Square. "Squid Trek" first, then "Doctor Woo", "W" (We Grill in Peace, Always!), "Space Splattership Woomato", and ending it all with "Mystery Inkling Theater 15000". All these can be viewed on my Twitter. I was hyped for this Splatfest!

When the time came, me, Zen, and two other Twitch viewers formed "Team Zen" (so Zen wouldn't run into the same issues I ran into the weekend before), and went at it. Zen wanted to try and Queen out in one rotation but...it wasn't going to happen. I admit, I'm not exactly an X-Rank player. Hell, I'm barely an A. But we did end after 3 hours and 20 minutes, a new personal best for me at the time!

The celebration was short-lived, however, as the then-unthinkable happened: Marina won a Splatfest outside of Japan! We were all dumbstruck at the time. She even got the popular vote (which more often than not, the Splatfest losing team tends to get).

But this would be just the start for Team Zen!