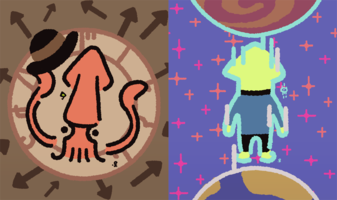 It's a battle between two of the most persistent tropes in all of science fiction. There is nary a sci-fi writer or franchise who hasn't dabbled in at least one of the two. Who wouldn't want the convenience of just jaunting from place to place instantly, reliving great moments of the past, or seeing where the future will take us?

Some of the most popular franchises of all time feature these heavily, from the temporal adventures of The Doctor, to the transporters of Star Trek (and hell, Star Trek has even dabbled in time travel, especially Star Trek: Enterprise). You have Doc Brown and Marty McFly, the creepy puzzle game Portal, even World of Warcraft regularly features both!

As much as most of us would love to be able to do both, we are forced to choose one or the other, and since time travel has fascinated me pretty much since grade school, I had to choose Team Time Travel.

In the lead up to Splatfest, among some of the usual artwork in Inkopolis Square, my heart just melted when I saw why some people chose Team Teleportation...mainly so they could instantly be with long-distance friends and loved ones. It's actually a rather sad side effect of the Internet, and connecting with people who could live as far away as the other side of the world. Sometimes those connections grow and flourish into more. I have had personal experience with that myself (and still do in regards to how far I live from the rest of my bio-family), and it can be quite heart-wrenching. I felt so bad for them.

When the Splatfest began, I gathered up myself, Zen, Ranko, and my partner Dana for the Queen run. The Shifty Station was the same one from the week before, and we were ready! We got a nice string of wins at first, but it did get more difficult as time went on, and our synergy wasn't the best, but we salvaged it into a 1 hour 47 minute run, tying my 2nd personal best from the month before, except this time, we had little enough down time that we finished it before the maps changed. The first time that had happened to me (I don't count my 1h 18m run because it was still done across two sets of maps, since we didn't start that run at its region's beginning)!

Then came watching others play it on Twitch. We seemed to be holding our own in Normal, but Pro was another story. Also, it was pretty evenly matched among 10x and 100x matches on the ticker. And of course, I didn't get any mirror matches on Team Time Travel until the fest closed in North America. I predicted Teleportation to take Popularity and Pro (and therefore the Splatfest), with both battle categories being close.

I wasn't off by much. The popularity was a bit more than I predicted, and while both battle categories were close, they both went for Team Teleportation, making it another 3-0 sweep for Marina!

Marina is now 11-3 for the Clout era, and 26-23 overall (counting Team Ketchup as a global win for Marina). The only ways Pearl can overtake her now are (a) next month has NO multiregion Splatfests, or (b) July has a Splatfest tournament. Right now, neither is likely to happen, and even if one or the other happens, Pearl would pretty much have to win EVERY REMAINING SPLATFEST!

Ouch. Poor Pearl. Maybe someone should loan her Doc's DeLorean to get more Splatfests.

All this talk about the coming end of Splatfests is getting me sad. Pardon me while I curl up somewhere...