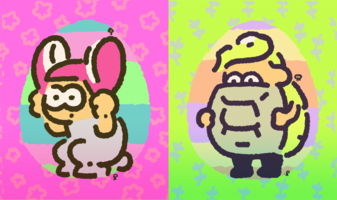 It's time for SpringFest!!!

It's the third of the four "special" quarterly Splatfests to mark the passing of the seasons, and they actually held it over Easter weekend (surprisingly, since the previous two were not held over the actual holidays themselves), so I had to share the weekend with another science fiction convention...MiniCon.

Luckily though, I half-planned for this. I got that Thursday night off from work, so I was able to start the Splatfest right when it opened in Japan, and I didn't have a hotel room (it's a very local convention), so I simply went back home each night and streamed another Queenout.

As for the subject matter of this Splatfest, you'd think they'd have gone with something like "Chocolate vs. Eggs", or "Bunnies vs. Chicks"...but no. Instead, they rehashed the fable of the Tortoise and the Hare and their infamous race, where the Hare tired herself out and took a nap in the middle of the race, and woke up too late to realize the Tortoise had already won.

The question is...who would win a REMATCH? Would the Hare learn anything, or will she make another grave mistake that costs her the race?

TO THE SPLATTERFIELD!! I chose Team Tortoise, not just because of fable canon, but also the reason why the Tortoise won...he paced himself. Smart strategy and smart use of bodily resources instead of trying to expend all your energy trying to be Sonic.

I ground a lot of chunks on my Splatfest Tee this time, as I had a ton of unused drink tickets that I finally decided to use, causing the tee to gain XP at a rate of 1.5x normal. I also used the opportunity to get my gear (both main and special fest gear) to exactly where I want them for the first time in...well, ever. I also finally used about 100 of my 1500+ Super Sea Snails toward the goal in rerolls. Feels good to finally have that bit of synergy between my three toons.

This Splatfest had a very interesting Shifty Station, and yet another one where the first order of business was to get to mid first, and worry about home base later. Not getting to mid could lose you precious turf as the mechanic was to ink a piece of mid, and lock it away behind a sealed area. An Ink Switch controlled how fast the floor moved underneath you toward the sealed area. In all, the locked area (after full extension) was about 3x as large as mid itself, making control of that turf key.

Basically, it felt rushed. And the presence of Splatoween slime and ghost decorations didn't help matters, despite the newer colorful decorations among them. They also used pre-existing outfits for Off The Hook...basically, their Octo Expansion gear.

As for the battles themselves...well, Tortoise got popularity obviously due to the number of mirror matches I had, and with Hare showing up on the ticker over and over again...it was a foregone conclusion, and my predictions were mostly correct.