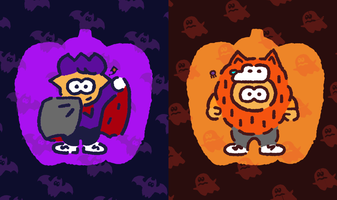 When this Splatfest was announced as taking place the same time as Dexterity vs. Endurance, I started making my plans. At the time, my partner and I were spending every Friday and Saturday night at Valleyfair's "ValleyScare" event.

I was all set to do this according to plan. I chose Team Vampire simply because when it comes to sentient creatures of the night, I've always had an affinity for vampires. Zombies are a close second, but I long missed that Splatfest. Wasn't in the right region for the zombie one anyway. But I have always enjoyed the concept, and even portrayed vampires in online text-based roleplay areas. Werewolves...not so much. I don't even play one on WoW.

NINE HOURS LATER, I finally Queened out the Japanese Splatfest...and went to bed. I set my alarm around 1pm, and got very little sleep, figuring that I could Queen out the American Splatfest faster.

I woke up with the alarm, grabbed a quick shower, and started in on my Team Vampire run about 2pm. I was still rather tired, but I played about average (for me anyway), Queening out in about 4 hours, my partner constantly worried that my playing would keep us from Valleyfair. After all, we're often honored guests in the vampire house, and it would be a shame to miss them.

We did make it to Valleyfair just fine, and the host of the vampire house seemed pleased that I dutifully splatted for Team Vampire!

Results for this Splatfest and Dexterity vs. Endurance came at the same time. I watched the Japanese one first, and as I was reeling from that loss, I saw how Team Vampire fared...

HOLY COW! A 3-0 SWEEP!! And I helped! It made Team Dexterity's loss that much easier to take.