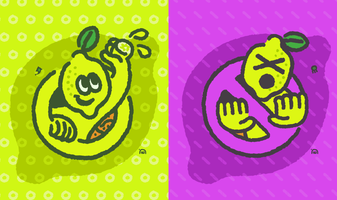 Before this Splatfest, I had never tried chicken kara-age. What it is, is basically breaded and wok-fried stir-fry style chicken. Some people like it with lemon, some without. For example, Marina hates lemon, saying how it drenches the breading and it loses its crunch...

...Damn, girl, how much lemon do you think we put on fried food, anyway?

So, assuming my usual experience with fried foods, I chose Team Lemon. After all, I love lemon on fried fish, and normally I like fried chicken (if it's not too greasy), so this can't be too much different, right? My partner chose the same way.

I figured that at some point before Splatfest, we really need to see what chicken kara-age is actually like. Luckily, there is a Japanese restaurant not far from us that serves it, so Friday afternoon, we went there. They served the chicken in a bowl, with lemon on the side, and a small dipping bowl of their house sauce. I snapped a photo of it and shared it on the Discord of an American-Japanese streamer I know.

He amusedly replied: "Never seen it served with sauce. How American!"

However, I did put lemon on it, and realized that I indeed did back the correct team for my tastes. My partner agreed with the assessment.

Splatfest time came, and I dug right in. My partner, remembering the connection issues of Japanese Splatfests past, decided to wait and see how the connections were. So I lobbied...

It wasn't until 30 minutes passed that I got my first match, a mirror match. At that point, I knew I was on the popular team. Another 30 minutes passed before I got my second match...and I knew that hell had come for me. Oh well, not like I had plans for Saturday anyway.

To pass the time between matches, I browsed Twitch to see who else was splatting in this Splatfest, and came upon another American streamer in Japan (that again, I would later follow and sub). We'll call him 'Zen', since he figures prominently in future Splatfest musings. Turned out he was Team Lemon, and one of his American viewers was also multiregioning and was also Team Lemon (having the same connection troubles I was), and of course, I was Team Lemon!

Sadly, my partner had already given up and fallen asleep at this point, so we didn't have our fourth. All I could do was watch Zen Queen out, while I was getting matches about every 20-30 minutes. He ended stream shortly after that, but we made a plan to help him out with Team Sci-Fi the next week, and meet up for Japanese Splatfests in the future.

I kept browsing Twitch after that, watching other Japanese players King/Queen out, another American streamer who hopped on stream just so he'd have company through the connection issues, the first American-Japanese streamer I mentioned from the kara-age photo (who was Team No Lemon) Kinging Out. Numerous squids coming on, finishing, and here I am still struggling for connections.

At 9am Central Time, I started getting some faster connections, and won more, but that party didn't last very long as 2 hours later, I was back to long connection times and about 30 points to Queen.

At approximately 2:45pm Central Time, 14 HOURS and 45 MINUTES after starting Splatfest, I finally Queened out. My partner was complaining how I "ruined the day". Determined to prove her wrong, we went out and did stuff afterward...coffee, mall walk, um...I can't remember much else. I just remember coming home and almost literally falling into bed.

I did wake up in time to see the Splatfest results. All that waiting, all those hours and... we lost!

I vowed...NEVER AGAIN will I be subject to a nearly 15-hour Queenout time. Hopefully, I will remain correct in that declaration.