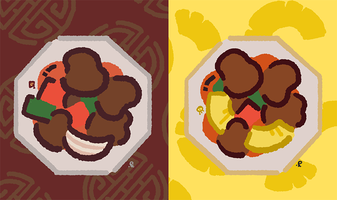 Rev up those fryers! We have another mouthwatering food Splatfest for your gaming pleasure!

This Splatfest is all about Sweet and Sour Pork, a staple food on the menus of many an Americanized Chinese restaurant, and since Japan in the late 1940s and 1950s had heavy American influence at a time when the modern Chinese-American restaurant was in its infancy, that style of food showed up in Japan as well. While things have gotten more authentic in Chinese restaurants in Japan over the intervening years, the allure of the classic Sweet and Sour Pork remained. That tempura-breaded pork covered with that succulent red sauce, made better with peppers and pineapple, is too hard to resist!

But wait! Apparently that last ingredient is up for debate! Some like the dish with pineapple, some without.

Whether Pizza or Sweet and Sour Pork, I tell ya, pineapple gets no respect!

I chose Team Pineapple, because pineapple belongs on stuff, dammit!

I couldn't start this Splatfest right when it opened, because at the time it did, I was still in the middle of a rather difficult Queenout that still had about an hour left. Luckily though, my planned team waited for me!

Unlike the previous Splatfest, this time, I had a couple of my heavy hitters with me: Zen and Angel! Synergy was on our side. We communicated over the voice chat like a well-oiled machine! We got some great randos with us! We won 2 10x matches BACK TO BACK! All this came together for a Queenout only one minute longer than my PB! A rather quick 1h 19m ride!

The Shifty Station was the same one from the Unicorn/Narwhal Splatfest...cue more people falling to their doom after a Booyah Bomb! *heh*

What a way to cap off the final Japan-only Splatfest! Sadly though, Dana expressed regret at not joining us.

Saturday afternoon, I decided to celebrate the quick Queenout with some Sweet and Sour Pork at a local restaurant in my area....WITH Pineapple, of course.

Later on at a local indie game shop, I decided to hop back into the fray with Ranko and Angel, and I swear, it was like Team No Pineapple took a level in badass during Japan's overnight! We rarely won at all, and even dropped an attempt at another 10x. This did not make me feel very confident of our chances, but I was at least able to help Ranko connect to matches quickly, which was the main point of that run.

Looking on Twitter, I saw three postings of 100x wins by Team No Pineapple, but Team Pineapple had a myriad of 10x wins, and a 100x of their own, so that could have made up for the shortfall. Granted it was only a small sample, but I called the clout for Team Pineapple by a slim margin.

It was a slim margin, alright...but not how I thought.

Team No Pineapple got the edge and swept the Splatfest by about a razor-thin 0.1% in both clout categories, giving Pearl her 4th Clout Era win, and second sweep in such, having swept with Team Salsa the previous November.

Maybe there's something in common between better splat gamers and the preference of bland food. *heh* We may never know.