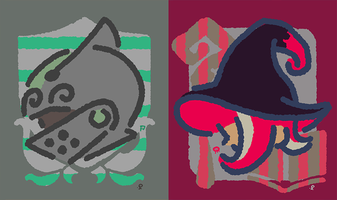 After Fantasy won over Sci-Fi in November 2017, I guess they decided to make things a little more specific this time. And with the gear that came with the Octoling Amiibos, I guess this Splatfest was inevitable.

They took two major tropes from the fantasy genre and decided to pit them against each other. On the one hand, knights can take a lot of punishment, they're skilled at hand to hand combat, and they would often live by a warrior's code...

Wizards...can bend reality to their will.

It's no contest. I chose Team Wizard. Not only because I mained magic-users in World of Warcraft, but also because of practical special-effects master Mike Jittlov, who fancies himself the "Wizard of Speed and Time"! My Splatfest art even featured his distinctive logo. (Seriously, if you haven't seen the movie of that name, see it! Great deconstructive parody of the Hollywood movie-making process :) )

Also, speaking of that Amiibo gear, there was a mechanic in this Splatfest where if you wore the Knight or Witch headgear and shoes, the Splatfest Tee would morph into that set's shirt. (Turned out this was also the case with the Woomy World mascot gear too, but it wasn't publicised). After saving and re-wiping my Amiibo enough times to get the witch's gear on all 3 toons, I was ready!

Once I dug in my American toon, it was mostly mirror matches, and about half the time on those, we got our butts kicked. However, out of 9 matches against Team Knight, we took 7. This was looking good. We finished up at about 2h 25m, still in my Top 10.

Then I switched to my Japanese toon...and I basically put together my dream team. It was me, Zen, and another from my community named Angel. We also got a good rando called Apples. And we just kept winning. Over and over again. We didn't have a perfect record, and Angel got replaced by a new viewer later on (who ended up MAXING OUT our synergy!), but it was enough to Queen out at a blazingly fast 1 HOUR 18 MINUTES!

We were truly "Wizards of Speed and Time"! The mirror match that ended the Queenout even had us using green ink, just like Jittlov's robes!

The Eurotoon run had "Zordias the Ink Machine" with me, but it was a more average run for me, finishing at 2 hours 12 minutes.

The Shifty Station was one of the more interesting ones, with a combo mechanic of Splat Switches controlling Spreaders. Control of mid, or rather its central switch, was key. Again, my usual "ink the home base" strategy took a back seat to rushing the central switch. It was also VERY easy to get to the home base via the side switch. It was one of the better Shifty maps, and I hope my thoery of the Shiftys being added to regular rotation after the final Splatfest comes to fruition.

After watching other streams, I had predicted Wizard to sweep, even if just barely.

Instead, we just barely WON! O.o The same percentage we were away from a sweep, we were also away from a loss. About 0.3% either way. But a W is a W.

Marina just can't lose anymore, as she goes 9-2 for the Clout era! All hail the new meme? It would appear so! This is also the first time Marina has taken a 2-Splatfest lead in the cumulative totals (24-22).

There is still one burning question I'm left with though: What wizard decided to shift the European start/end times backwards two hours? Seriously! Some friends of mine across the "big pond" missed out on their royal titles because of that! What a rip off!

Only 4 more months of Splatfest to go, and it looks like next month wil be the next 48-hour one, mainly because we got a taste of it this weekend in the "Turf War" splash logo at the beginning of each match, which featured images of Easter eggs and candies around it.

Is next month Easter-themed? Weird considering Easter isn't as big in Japan, but the proof may be there. See you for "Egg vs. Chocolate"? Time will tell. :)