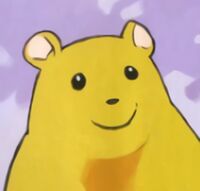 Hello Guest. I also go by 9-Volt on sites where some weirdo already took the name DaRootBeer. I joined Inkipedia when Splatoon 3 launched because it sounded fun to help edit some of the info. I don't know how any of this wiki code stuff works, so 99% of what I do is some master level copy and pasting of stuff that already works, then making minor tweaks until it's how I need. If that doesn't work then I just brute force it until I run out of ways to screw it up

My Friend Code is 3665-7109-2601. I might not accept a request, because playing with random people makes me uncomfortable. However, I've been trying to be more social online and so if I feel like stepping out of my comfort zone then I'll add you. I'm also maybe down to chat on Discord. I won't be doing and voice chat though. Maybe later if I get more comfortable with all of this.

Also because this sounds like fun, I'm giving you permission to edit my page within these lines. Feel free to add something random in this section. If it's cool I'll keep it. Don't delete other people's stuff. Don't edit any where else on the page. Thanks and have fun!

I made fun of the Splatoon Commercials. (So I never got the first game. I regret it)

Ironically, the people who say to Booyah back never actually Booyah back. ArivakiVA

Can we sign a petition to get people who say 'paint' and not 'ink' to stop? My friends do it and I have no literal idea why- ArivakiVA

My Personal History With Splatoon

I started with Splatoon 1 back when it launched. I never got super into it, but I thought it was fun and got to like rank 16 or something. Eventually, Splatoon 2 came out and I had basically the same experience with that. Liked it, but didn't get super far. I was more interested in the single player aspect. But years later, I got the Nintendo Switch Online and got access to Octo Expansion, and decided to hop back in after having not played for like 3 years. Needless to say, Octo Expansion is already hard, but it's 10x harder when you're mega rusty with the game. Either way, I beat it and decided to get back into multiplayer, and that was when I decided to make it a main stay game for me. I just recently decided to move on from another online games (Dead by Daylight) and wanted something else to fill the void. Later, I got Splatoon 3 and the rest is history yet to be made.

Undercover Brella. I know that it's really bad, but it was what I played in Splatoon 2 so I have some experience with it. I'm of the belief that the Undercover Brellas are actually really good, but the one is Splatoon 3 has a horrible kit. Who in the world thought Ink Mines was a good idea? Also the glitch where you get hit behind the shield is really infuriating and makes playing the weapons a gamble. In a way I kinda regret getting good with a brella, because it makes transitioning to something else really hard. Nothing else plays like a brella, so all the time I've invested is exclusive to it and it alone. That being said, I have been trying to get better with other weapons. Now that the

Custom Splattershot Jr. is out, I've been using that. I was using the normal

Splattershot Jr. for a while and got pretty good with it, but I LOVE the kit on the custom. Torpedo is my favorite sub ever and Wave Breaker is also really fun. I've also decided that I'm going to try and learn the

Splattershot Nova cause I want to learn a more support type weapon.

Return of the Mammalian

I don't really want to say much and would rather remain anonymous for now. But some stuff I'm fine with saying, I play more games than just Splatoon. I really enjoy the Zelda series and can talk about it for hours. I've also been working my way through the Shantae games. I don't don't have the money right now to buy the last 2 but I plan to eventually. I also semi recently finished playing through all the Metroid games back-to-back, which was super fun (Super and Dread are the best). I'm kinda working through the Kirby games right now, but I'm taking it slower as to not burn myself out of them. I'm also trying to beat every Pokemon game, but that's taking a back seat because I didn't really like Soul Silver and I want to take a break.

I have 3 dogs, with 1 in particular being by best buddy in the whole world who's probably sitting on my bed behind me while I make edits. I am currently in college and am majoring in political science. I'm one of the psychos who actually enjoys watching politics. Though I'd prefer if people didn't ask about my personal politics, as I play Splatoon largely to step away from it when I get overwhelmed. But I guess if someone really did want to then I might be down to chat about it, so long as it stays respectful.

Also if you want something stupidly long to read, here's a document I made discussing all the dungeons in the Zelda series. It's not complete yet, but it's almost done. Also it was suppose to do this cool thing where each game's section has the same fonts that are actually used in game, but it doesn't look like that shows up in this copy, RIP. If you're crazy enough to actually read some of it (or god forbid all of it) let me know. The Wind Waker section is my favorite. https://1drv.ms/w/s!Agqgvt14QZcI3SHhPHR0WxMQB3l-?e=tfs2b9 (It might take a hot minute to load)