Regarding the amiibo article:

My goal is to seperate the Splatoon amiibo themselves and their function in the Splatoon games into different sections.

Those concept sections I think could be used for the amiibo article (minus my personal notes):

Scanning in an amiibo

The only amiibo that can be used in this game are those from the Splatoon series, where all currently released figures are compatible. The amiibo can be scanned in an amiibo case situated in Inkopolis Plaza, and used to unlock twenty different challenges with five unlockable boss challenges in Octo Valley and new exclusive gear to wear into battle. The amiibo case is located at the southeastern corner of Inkopolis and it appears as the packaging amiibo traditionally come in. When scanning an amiibo (if the amiibo is registered) a flurry of paint circles the inside as the corresponding amiibo forms inside of it. The character introduces themselves and lays down guidelines for their challenges.

The Inkling Girl, Boy and Squid amiibo feature twenty challenges if the single-player mode, Octo Valley, has been completed. The first challenge gives the player six hundred cash as a reward, with the reward increasing by one hundred more cash for each next challenge (i.e. one mission reward is 1000 cash, while the next mission reward is 1100 cash). Each challenge can be completed again, though for only a reward of 100 cash. When three challenges in the same row are completed, the fourth challenge for that set is unlocked, being the boss for its corresponding area in Octo Valley. As opposed to a monetary reward, the boss challenges provide three pieces of gear for the first three bosses, a minigame for the fourth, and a weapon blueprint for the final boss.

The Squid Sisters amiibo allow the user to view concerts in the plaza, similar to a Splatfest. The different versions of the Inkling Girl, Boy and Squid amiibo share the same behavior, whith the challenge tree also being shared between the different versions. 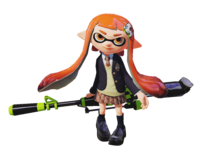 The amiibo offers 20 Charger challenges in Octo Valley and rewards the player with an exclusive costume piece for every four challenges completed in the corresponding area. After completing all challenges, the player will complete the set and receive the exclusive School Gear along with the Squidball minigame and the Hero Charger Replica blueprints, which is a reskin of the Splat Charger.

The amiibo that appears in the box relfects the scanned in amiibo, with the exception of Inkling Girl from Splatoon 2, where it defualts into showing the original Inkling Girl amiibo.

These Octo Valley challenges must be completed with the Hero Charger: 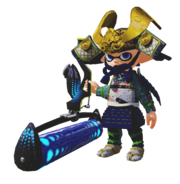 The amiibo offers 20 Roller challenges in Octo Valley and will provide the player with an exclusive character piece after every four challenges completed in the corresponding area. After completing all challenges, the player will complete the set and receive the exclusive Samurai Gear along with the Squid Racer minigame and the Hero Roller Replica blueprints, which is a reskin of the Splat Roller.

The amiibo that appears in the box relfects the scanned in amiibo, with the exception of Inkling Boy from Splatoon 2, where it defualts into showing the original Inkling Boy amiibo.

These Octo Valley challenges must be completed with the Hero Roller: 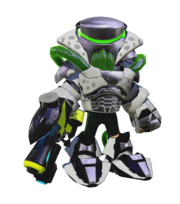 The amiibo offers 16 Kraken and 4 limited-Ink challenges, and Shooter challenges in Octo Valley and will provide the player with an exclusive costume piece after every four challenges completed. After completing all the challenges, the player will complete the set and receive the exclusive Power Gear along with the Squid Beatz minigame and the Hero Shot Replica blueprints, which is a reskin of the Splattershot.

The amiibo that appears in the box relfects the scanned in amiibo, with the exception of Inkling Squid from Splatoon 2, where it defualts into showing the original Inkling Squid amiibo.

The Inkling Squid amiibo allows players to complete specific Octo Valley missions in two ways: some can be completed as a Kraken with limited time, and others must be completed with limited ink. In the Kraken Challenges, the player is given the ability to turn into a Kraken instead of a Squid for the entirety of the level. In limited ink challenges, the player is given three or four full Ink Tanks to complete the level, but ink cannot be replenished. The challenges are as follows:

Both the Callie and Marie amiibo can be used to unlock exclusive in-game Squid Sisters concerts, including two exclusive solo songs; one for each sister. Using either of the Squid Sisters causes the Plaza to take on its appearance during a Splatfest, themed after the game's last topic, namely the Callie vs. Marie Splatfest. The player will be colored after and wearing a Splatfest Tee for whichever Squid Sister was used. During the concert, no buildings can be entered, nor can Judd be talked to.

The Squid Sisters can perform the following songs, each with their own dance routine:

Taking photos with an amiibo

Like its predecessor, only amiibo from the Splatoon series are compatible in Splatoon 2, where they can be scanned in into an amiibo case situated in Inkopolis Square. Some of the new features they offer are being able to save full equipment sets and control settings, with each amiibo being able to store one at a time. These can be loaded to the player's character in the lobby or Equip menu. They can also be used as in-game friends where the player can take pictures with them, while having the option to dress the amiibo up in its saved gear set for the Inkling and Octoling amiibo. The places for these photo ops are located around Inkopolis Square, which accounts for all current amiibo, as well as all multiplayer stages implemented in version 2.0.0, which only goes for the Inkling and Octoling amiibo. Opon scanning them in for the first time, the player is granted some headgear of the amiibo's corresponding set as a reward and further rewards can be obtained by battling or saving the obtained amiibo gear to the figure.

All the amiibo, except the Callie and Marie amiibo, can be used from the start of the game. They become available to use after the player has cleared the Octo Canyon campaign. If they're scanned in before reaching the mentioned requirement both amiibo will display a message in the form of a letter from the representing character, stating that they are too busy to show up.

All of the rewards follow a pattern of giving out gear from a specific set starting from the headgear, then clothes and shoes, and having the fourth reward being a song or something related to Squid Beatz 2