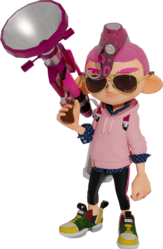 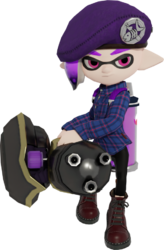 My OC rendered in Blender 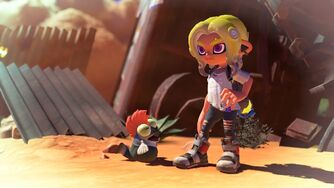 Gear will be determined as I level up

Hello lurkers and editors of Inkipedia! Call me Nick, I'm a 20-year-old electrical and computer engineer from Greece! (if you are Greek by the way, leave a comment in my talk page!)

My history with Splatoon

It all started back in the very first Splatoon trailer... and I actually found it dull. I was like, 12 at the time, but I didn't see the appeal to the game, even as newer trailers came in. However, when the testfire came around (which sadly I couldn't try cause I wasn't home at that period) I watched some gameplay that popped up on my feed... and I loved it. As soon as I got back home a couple weeks after release, I purchased it and have been in love with it ever since.

I never played competitive in S1. Once I had unlocked everything, I pretty much played

Crazy Arrows. Horrendous, I know, but I was 13. I was having a lot of fun however, and I couldn't care less about the competitive side. I did go into ranked, but again, I didn't mind my rank.

Since I didn't get a Switch until summer 2020, I continued playing S1 until 2018. By that time, my schedule had started growing tighter, Splatoon 2 made matchmaking a little slower, but my hype was unending. I had kept up with S2's lore but not the actual gameplay. Eventually however, there was a period when I neither played S1 nor kept up with S2. In late 2019, I took the decision to sell my WiiU, asking my parents to use that money for the Switch (mum wasn't too thrilled with the idea because the WiiU was a flop after I already had the Wii). We would hold on to the purchase until I had finished my high school finals (here in Greece we have the Panhellenics, which basically is what gets us into unis, so I really had to focus on doing well).

When the time came for me to purchase the Switch, the sole reason I didn't buy S2 was because I didn't have any friends to play with. Thinking that 3 years had passed since release, I wasn't sure if many were enjoying it still (boy was I wrong, but whatever). It all changed when I was in two seperate groups. One was a Greek server about Nintendo games, they were active in S2 during the first quarantine but I started paying attention to S2 pings after Summer 2020, where the activity was toned back a little. The other one was a Fire Emblem server where people would host their own campaigns, and one of them was themed around Splatoon! (That's also were my OC Nostee came from).

Those events reignited my love and excitement of playing the game, and I purchased S2 on 12 December 2020. Not to brag, but I also hyped up the others in the server, since I would be in VC 8 hours a day since we were doing online classes (which I promptly ignored). That said, I'm playing S2 kinda for fun. While I have gotten quad X, I don't really like the meta anymore, nor do I like succumbing to it in order to have fun. So I prefer taking a silly idea to turf war (e.g. mine kills) or play in PBs on the server rather than tryhard in SoloQ.

Now... you can imagine our reaction in the February 2021 Direct. AKA SPLATOON 3 ANNOUNCEMENT!!! It was almost 1 AM for me, but I screamed at the news and pinged the S2 role to let the guys that were asleep know what they missed. I also screamed in another server after that. Since the first game, after watching several videos analyzing small things, I became an analyzer myself, trying to find little details here and there. I've analyzed all S3 trailers, spammed the discord chat, and my body is ready for 9/9. I've already pre-ordered the game and I'm willing to spend hours upon hours on the release week.

Nostee Algia, my OC (as of Splatoon 2)

I am going to shamelessly copy his application onto this section... It mentions a friend's OC, Salacia, they are a cosplayer. 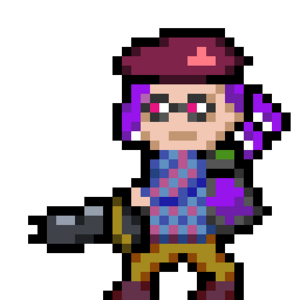 Sprite used for the campaign (enlarged)

Personality: Nostee is a mostly emotionless inkling. When taking photos of his subjects, whether they are someone or something else, he hardly moves a muscle on his face, having an intense poker face. When talking, he sometimes breaks a smile or frown. That’s not to say he’s not one to talk, just don’t expect an intense reaction out of him.

The only thing that he has strong feelings about is the powers that be. Specifically, how they have banned some specials after being deemed “overpowered”. He goes to every protest that happens on that front and has a secondary email account dedicated to spreading the word about a movement to bring those back.

His style is rather old fashioned, but if you ask him, he will say it’s “vintage”. 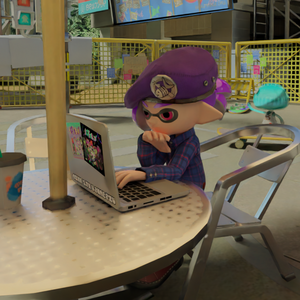 Family: Single squid, parents are in the neighboring city

Backstory: Nostee was an accident to his parents. When he was born, they barely had space in their small apartment at the recently-built Flounder Heights. The apartments in the complex were not as expensive as they are now, but their small size made living difficult for the three inklings. Thankfully, the rooftop was yet to be used in Turf War, allowing the young Nostee to play with the see-saws (before they broke) and climb up the trees with his friends in order to have fun in his spare time.

Having an excellent view of Inkopolis, Nostee grew a passion for photography early on. After becoming humanoid, he would often sit on the rooftop of his block of flats and take scenic pictures of squiddos playing at the park or the distant mountains, gradually expanding his subjects as he grew older. He was part of the special group that was to playtest matches on Flounder Heights for Turf War, being one of its residents. He had an absolute blast and loved all the changes done to the building to sustain this decision. This earned him a lot of money, which he gave to his parents. He wanted to stay in the apartment, but the lack of space was still an ongoing problem. With a heavy heart, his parents agreed and they moved to the neighboring city.

Once his skills as a photographer were known to the public, he gradually received job offers. This helped him become more popular and his photos have been featured in magazines and posters. His ego wasn’t exactly bloated, but he started looking for better subjects; more scenic places, more stylish or unique people… On one of his adventures he stumbled open an inkling named Salacia. Her perfect cosplay, her pose, her aura… it was exactly what he needed to show his skills! Apparently, she was already starting to become popular, but she wanted to rise in fame even more. With her setting up social networks to show off her cosplays, he offered to pick up the role of her official photographer. Ever since, the two have kept a mostly business relationship, but after working together for a while, they started chatting more after the photo shoots.

What made Nostee the emotionless man he is now is when the powers that be decided that a Turf War overhaul was in order. His favourite Specials, the Kraken and the Killer Wail, were now officially banned and the Rainmaker was changed to shoot some dumb bombs instead of being like the Inkzooka. That was madness. Sure, some people cared about their rank and didn’t want to die to, quote, "unbalanced weapons", but instead of reworking them they just BANNED them. When he heard the news, he didn’t leave his apartment for a week, claiming he was sick. What made matters worse is that shortly after, Flounder Heights was no longer a valid place for battles. Apparently, the rising land value made it so people were appalled by all the ink being shot around the lot, even if it disappeared. Devastated by both news, he decided that he wasn’t going to sit around and do nothing. He started a petition: https://changes.com/freethespecials, dedicated to bringing those specials back. On the weekends and on days where he had to do little editing or not take many photos, he would search the internet for influential people’s emails and send them the following: 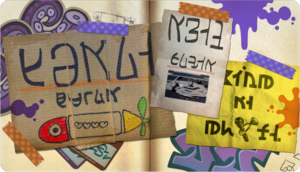 e-mail attachment: SAVE THE SPECIALS!!!

Are you tired of the powers that be deciding which specials are allowed in battle or not? Do you feel PITY for all those manufacturers that had to redesign weapons made for FUN? Do you also not give a carp about weapon balance in the present meta of Turf Wars?

If the answer is YES - make your voice heard! Sign this online petition https://changes.com/freethespecials and help us spread the word that the Inkzooka, Kraken and Killer Wail should stay, despite their "poor design" or whatever haters decide to call it.

Don't let yourself be constrained by the new Rainmaker or the Sting Ray; be the change you want to be and help us bring back the fun we used to have!

At the same time, he found another forum about re-opening the old places. He is one of the most active people on the Flounder Heights thread, and 87.3% of his posts are about his story and his efforts to bring the battles to how they once were.

Splatfest Data to get to know him at a glance. (I am European so you will get the European ones. Only showing the ones he participated in.)

That was the application... I made it December 2020 just after I got Splatoon 2. Looking at it now, some parts have aged quite well, hehe... He would be happy with the returning specials; let's hope his home stage returns too (it's my personal praige, too).

Nostee Algia as of Splatoon 3

(OLD THOUGHTS) I'll think about it more once we get to know more about Splatoon 3, but what I can safely say is that he will be a lot more energetic and joyful, seeing how his efforts bore fruit.

He'll most likely play a weapon with either Tri-zooka, Triple Inkstrike or Killer Wail 5.1, and perhaps he will have a change of heart and update his wardrobe. Not sure how wild I will get with this, but it will be more chaotic than modern (he did pick Retro and Chaos, after all, both because he wanted things to change into how they used to be and not follow the powers that be).

(10 August 2022 THOUGHTS) With the Splatoon 3 Direct, we know that Flounder Heights wil return so he is gonna be more than overjoyed! No more emotionless squid era! However, Harmony helps run Hotlantis, so I'll have to wait and see if Chirpy Chips have disbanded or not (PLEASE DON'T THEY ARE MY FAVOURITE BAND TOO)

Also new specials to think about. Reefslider and Inkjet are new picks now. We'll have to see once I see the starting kits.

Technically this is from the Switch itself but shhh...

While this is the third fastest possible time (miliseconds don't count), this would place me on 53rd place at the time of writing this. (everyone on 00:40 is 18th, for reference)

A lot of those were basically the same, but in my contributions, they all count when filtering by (Main) space