The following are an Inkling's genetics.

Inklings have evolved to speak in clicks, whistles and other inanamite noises. Inklings have swearwords, as seen in an explicit inkling song.

Inklings are generally made up of Ink, Water and oil. This allows them to change their shape to that of a squid, as well as swim through ink and slip through grates, an ability that they can use for flanking opponents. Inklings are heard to melt into ink once they are old enough to die, however, a unique organ that responds to enemy ink causes them to be "splatted" forcing them to respawn at a spawning point set up especially for them and their teammates.

Inklings' gear comes with randomized abilities. Abilities are soaked into the inklings' ink, inside its body, causing it to play some role in the inklings' Turf War, Rainmaker, Splat Zones and Tower Control matches.

Inklings have color-changing tentacles, known to morph into a different color every battle. These tentacles, noticeably, have "sensors" in them that read Special weapon gauges, glowing whenever one of these special weapons are ready. In the case of Marina and Callie, extra tentacle cells cause a black color to appear, while Marie and Pearl's cells created a white color. In squid form, Inklings keep their tentacles, but the cells spread the color out, so that the squid is entirely rendered in that color. The tentacles have dots at the bottom of each tentacle, being a darker variant of the Ink color. Inklings can put their tentacles down, put it in a ponytail, cut them shorter, make them wavy or cut out the tentacles entirely, causing them to be able to put it in a spiky Mohawk. For Splatfests, the color is stuck in the team color unless entering a practice, but afterword it changes to match the Splatfest team again.

Inklings have eyes that have an "expanded" coloring organ, allowing red, black, grey, blue, orange and yellow eyes, along with brown and purple. In squid form, Inklings' eyes merge with other colors, causing the gray-black eye color of a squid. Inklings' pupils are round, but Callie Marie and Pearl have plus-shaped pupils, possibly a unique disorder-like eye change. The same can be said for Marina, as she has 8-shaped pupils. The mask-resembling eye-markings close up in squid form making them smaller in size, and are otherwise unseen on other humanoid cephalopods, as Jellyfish are very little and do not have changing ink colors, only in Splatfests, thus having a evolution that has human-like eyes. Octotroopers do not have them and neither do Octolings. Sea urchins like Murch and Spyke have black markings, but sea-snail-like creatures like Flow, Sheldon and Flow's pet Craymond do not. Inklings have dark black eyes, but, similar to real-life octopi, Marina has light black pupils. It is unknown how she accomplished this. The Squid Sisters and Pearl have dark brown pupils.

Inklings, similar to real cephalopods, can create light from their bodies. In Splatfests, Inklings in kid form will remain dark, while Inkling Squid Amiibos or Inkling squid forms give off a slight glow, while its eyes remain dark. However, this glow only appears in Inkopolis, while squids remain dark in battle. The darker the light around the Inkling is, the lighter and more obviously seen the glow becomes. Jellyfish give off glows, too, despite the fact of them being unable to do ink battles. The small Ink bits that come off a squid as it slithers glows too, and this glow is possibly because of bioluminescence.

Inklings are first born resembling a squid, and once they turn two their arms and legs, and their fingers and toes, begin to grow. By the time the growth of the arms and legs is done, Inklings are likely seven or eight. Inklings' color all over their body turns peach, with the exeption of their tentacles, as they turn nine. They, at fourteen or maybe thirteen, gain the ability to transform into a squid. Throughout ages ten to twelve, Inklings learn to do Turf War and practice until they can control both humanoid and squid forms, when they do real Turf Wars. Some Inklings mature faster than others, including the Squid Sisters and possibly Pearl. Maturing faster simply means one-year-old Inklings grow arms and legs, the growth of arms and legs finishes at age six, they resemble humanoids at age 8, and control both forms at age twelve. 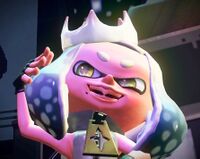 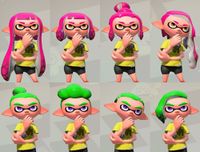