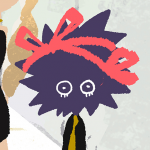 Hello, I am Jasmine, aka WayslideCool, aka mszarves, aka CompliensCreator00, aka ShinyCelesteela, aka Mod Hooligon, aka MC Foreign Policy. I'm an 20-year old artist from West Virginia, and a huge fan of the Splatoon series. I've played since October 2015 (I think?), but really got interested starting March of 2018. A mix of the minor world-building details (Shellendorf Institute had me particularly impressed) and the music I guess was just enough to pull me in! But I'm glad it happened, I've had a great time with the games, and am really happy to help out on the wiki when I can. I'm definitely not the most active -- but I will help out if needed! So if you need my help, feel free to give me a heads-up!

I usually play as an Inkling with the Hippie hairstyle, the tight black pants, the Backwards Cap, Takoroka Windcrusher, and Crazy Arrows. Though sometimes, you'll see me playing as an Octoling with the Tentacurl hairstyle instead, and sometimes you'll see me playing with an entirely different outfit altogether. Splatoon is as much a fun shooter as it is a fashion simulator. My main weapon is the Tri-Slosher Nouveau, though I usually use the classic Tri-Slosher in ranked. Occasionally I mix it up, but for the most part, I know what I like and I like what I know.

I've also read the manga, up to the beginning of the Octo Expansion arc, before realizing I'm not a particularly big fan of the manga at all and have virtually no reason to continue reading it. So I didn't! Sorry to anyone who enjoys the manga, I won't intrude on your territory, but between the plotlines feeling kind of repetitive and the unfortunate transphobia, I didn't really see much reason to continue with it.

I'm a big fan of the obscure side-musicians in the series, particularly Ink Theory, and could probably tell you my excessive headcanons about them if you were to ask me. So for the sake of your sanity, please don't ask me.

For a moment, I tried holding my own Splatfests with friends. They were fun but... participation was way too low for me to find the motivation to continue doing them. You can read up on them here, though.

Here's a list of my favorite and least favorite stages. The order isn't exact for the favorites, sometimes Ancho-V Games and Wahoo World switch places and there are a couple other stages I like playing on from time to time, but I'd say these top five are pretty solid. The least favorite stages is even less exact, and for the most part "stages I'm less good at," but I've been improving at most of them after trying out new strategies! I'm judging each stage by its latest interpretation, which is why Arowana Mall isn't one of my least favorites. It saw some pretty nice improvements in Splatoon 2!

Since it feels wrong to put them in the same category as all the other stages, here's the Shifty Station variations I enjoyed playing on most!

Not including redirects, talk pages, or file uploads here. These are full pages that I initially created.