From Inkipedia, the Splatoon wiki
< User:WayslideCool
Jump to navigation Jump to search 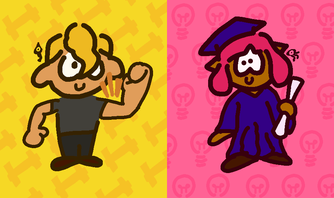 The theme was chosen at random on August 31st, 2019. The question is whether brawns or brains are more important, effectively meaning "strength or intelligence." The first round of matches was hold on September 17, 2019, with twelve matches being held overall, Brawns winning nine and Brains winning three. On September 29, 2019, an additional round of matches was held, adding an additional eleven wins for Brawns and ten for Brains, evening out the battle score more. The Squadfest was concluded on September 30, 2019, officially declaring a win for Team Brains, primarily won by their heavy victory in popularity.

The three stages selected for this Squadfest were: Musselforge Fitness, Shellendorf Institute, and A Swiftly Tilting Balance.

Results if Brawns were to win