DISCLAIMER : THIS PAGE IS STILL BEING EDITED How I Play Online

At the beginning of a battle, I'll always Booyah! Don't Booyah! back? Get off my bio.

Usually, I play Turf Wars to prepare myself for Ranked Battles or simply for fun!

I'm just an average, friendly Splatoon pro. I'm not normally salty to other players or focused on getting the most kills, but instead I like to get the most fun out of every battle I play whether it is a win or a loss. I always stick to the objective and do whatever it takes to support my team, so I'll always be there. Just say This way! :)

I like to participate in Ranked Battles to give myself a challenge against higher skilled players or just to simply have fun as always!

I can be extremely competitive in Ranked Battles depending on the opponents: the stronger the team, the stronger I am as well as my support for the team. I try my best to keep everyone to the objective by helping prevent the other team from advancing or by assisting teammates into advantage.

I use a different variety of weapons whenever playing Ranked Battles, which ultimately varies my playstyles as well:

Using long ranged shooters, such as the Forge Splattershot, .96 Gal, Range Blaster etc., I like keeping opponents at a distance from their advantage and I usually stay back behind the team for support. Probably will have the least amount of kills with this but give out strong support.

With shorter ranged shooters, such as the Luna Blaster, I prefer to get personal with opponents, attacking from up-close and not from afar.

Weapons such as the Foil Squeezer have both short and long range. Using this weapon, I’ll attack from up close and from afar. 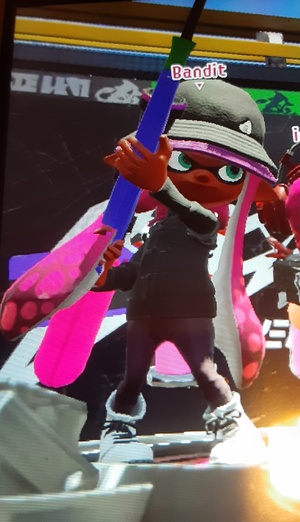