We're glad you decided to create an account and join us at the free, editable encyclopedia all about Splatoon! You are now able to edit pages, join discussions, and expand our coverage of the game. Here are some things to keep in mind while editing:

Again, welcome, and we're glad you're joining us! Sincerely,

I seen on your user page that you want Barnsquids, you can reward YOURSELF some Barnsquids from Splatfest or whatever rank or level you are, just type in Barnsquids on the search icon and it must say ink barn, click on that and you can see all the Barnsquids that you desire. gtKaged

Yes, you are allowed to give others Barnsquids! However, Barnsquids for edit counts and similar landmarks are usually not given; people simply put them on their own userpage if they feel like it. Other Barnsquids, such as the Gold Barnsquid (and any other award Barnsquid) should be given to you by someone else; in that case, these Barnsquids should be left on their talk page.

Sorry if my revisions of your edits came off a bit too harsh! Keep up the great work! :)

And one more thing, usually Barnsquids are given to people on their talk pages. I know you're just being nice, but some people might find it rude if someone else changes their user page. :b --Bzeep! talk 12:16, 29 February 2016 (UTC)

Thanks for contacting me! Did you use the guide I made to create your edit counter? If so, when you go to your user page there should be a button that says "Edit counter v111" on the left sidebar. Click on this, and your edit counter will update!

Actually, I think I remember my Splatfest titles. All of them were Fiend, except for the North Pole vs South Pole and Fit vs rich Splatfests, where I was a defender.

Hey, In future, only welcome users who have made at least one contribution, since a lot of people just make an account and never edit. Thanks,

Hey again, the trivia point which I had initially removed is rather redundant, since more-or-less all dialogue within the game is different between regions. Thanks,

if you mean the code for how to format signatures, see the signature policy. If you want help actually making the code then we need some sort of idea on what you want your signature to look like. :) Kjhf Talk Contribs 16:36, 24 March 2016 (UTC)

I want the color to be blue, I want it to say 'Mr squid' (obviously),and I want it in some nice font. Just make it for me and I'll tell you if anything needs to be changed. :D

We're very impressed with your recent contributions, and would love for you to join us in the free Inkipedia Skype group text chat! There, we play Splatoon, discuss the wiki, and more! If you're interested in joining:


Thank you for helping out, and we hope to chat more with you soon! Sincerely,

I removed it since it doesn't have its own article and is a pretty minor thing that isn't even mentioned in-game.

Somebody should put a gallery on Inkipedia full of pictures of different places in Inkopolis Plaza that can be seen only using the out of bounds glitch (e.g. the cafe, the back of shops, the train station, behind Inkopolis tower, etc

User talk pages should be used to contact a user or provide constructive criticism on their edits. The types of edits you've made to your own user talk page would be better suited towards a user page (for showing off your signature) or a main article's talk page (for making suggestions to improve a page).

Sorry! I will not do stuff like that 😀 Interestingly, I was reading the policy on talk pages when you sent it!

Finally on the talk page of yours! If you need to edit the article Splatoon (manga) click here. From

If you need anything, plz let me know, OK?

|Contribs) Oh and BTW can you add me to Inkling of the Month? 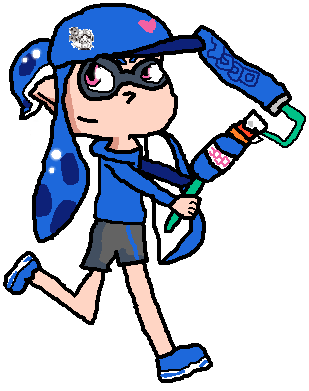 Hello! Five whole days untill voting arrives and yet I am not nominated by you

Hello, Mr squid. I know we haven't talked in quite some time, but I've come to advise you to not nominate Goggles-kun Inkling. I am in no way saying that they're a bad person, but they've only been on the wiki for about a week and has already broke an Inkipedia rule (nominating themselves). I know you've been talking to them quite a bit, so could you possibly talk some sense into Goggles-kun? Thanks, have a good day. --Sigma talk 18:59, 11 June 2016 (UTC)
Goggles, please don't ask other users to nominate you. While it's not against the policies, it's a bit too desperate to ask. Likewise, it just reduces your chances even more if you keep asking it. Thanks. // Sỿl (talk) 19:10, 11 June 2016 (UTC)

Being called Goggles, you defenatly know that Goggles is short for Goggles-Kun's name ^.^

Hello Mr. squid, I was wondering if you were willing to work with me to create the walkthrough needed for the Octo Valley Missions? I think that with the two of us we can finish what is needed for Octo Valley.--Snowwarrior92 23:07, 21 June 2016 (UTC)

Awesome, I've been having trouble creating the walkthroughs (I'm not very good at giving directions). I was wondering if we could create a sandbox, where we could work together to get this project off the ground and that way we won't be constantly banging heads. :) --Snowwarrior92 04:01, 22 June 2016 (UTC)

It's here. Not much on it, though.

Wicked Awesome. Seeing as you created the sandbox I think you should get to pick the first mission we should get started on.--Snowwarrior92 09:12, 23 June 2016 (UTC)

I'll start with Inkrail Skyscape as it is the first unfinished one, is one of my favourites, and it looks a bit odd half completed. We can both improve the walkthroughs until it is good enough to put on the article.

I've also added my name to the Current projects chart.

This change to Battle Dojo was an unacceptable usage of rollback. While the change was indeed creating a typo, the user was good faith, so it should have been undone, not rollbacked.

Reminder of this with your recent edit to Splattershot Jr. This rollback was arguably an even more blatant violation. You should have undone and explained why you were removing the trivia point. If this behavior continues, your patroller status may be revoked.

Sorry! I thought that rollbacking was just a quicker way of undoing edits. And for the second part, I think I might have accidentally clicked on the weong button! But in the future I will try not to use that tool unless it is really needed.

They more or less do the same thing, except that rollback doesn't give you the chance to explain why you are reverting the edit. Unless an edit is obvious vandalism or spam, you should almost always give a reason for undoing an edit. This keeps things clear, doesn't discourage editors as much, and helps prevent arguments and edit wars. ~SuperHamster Talk 17:00, 5 July 2016 (UTC)

I played with you in a match ^_^ as ND∞たかぎ nothing that important tho :P gtkaged

When? I haven't played yet today.

Hello, I'm just wondering if you can make this transparent:

I'm not sure how to do that, maybe you could ask someone else?

HELP ME WITH MY SIGNATURE

I LOVE YOUR SIGNATURE! Can you please help me in how you do that? Like tell me how do you add a image in your signature, separate tabs like talk and contrib, fonts, and how to save that on the signature page on settings! Also, can you teach me how to do this: Stay fresh! but with different colors???? Aquastarz13 (talk) 17:35, 16 July 2016 (UTC)